EC should probe role of officers who connived with CPM workers: Rajmohan Unnithan

He said the Commission should gather more evidence from the footage from web camera and initiate action against those who violated the law, he said.

KASARGOD: The Election Commission should probe the role of the returning officer, who is also the district collector, and other presiding officers in the facilitating bogus voting in Kasargod LS constituency, said UDF candidate Rajmohan Unnithan.

He said the Commission should gather more evidence from the footage from web camera and initiate action against those who violated the law, he said. 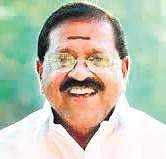 He said the EC has found four CPM members -- Cheruthazham gram panchayat member M P Selina, the former panchayat member Sumaiya K P, Moolakaran Krishnan of Kadannappally gram panchayat and Vyapari Vyavasayi Ekopana Samiti member K C Raghunath -- guilty of election fraud. “Now the CEO should take action against the officials who fecilitated the fraud,” he said. After 11 am, there was no UDF booth agent at Pilathara booth. “The EC asked where was the booth agent. But for the booth agent, his life is more important. A dead booth agent cannot give statement to the EC,” he said. Unnithan said the CPM’s Kannur district secretary M V Jayarajan’s argument that they indulged in ‘open vote’ was laughable.

Now, CM Pinarayi Vijayan should explain how a panchayat member of the CPM could indulge in bogus voting, and what action would be take against her, he said.When Siddique lost by around 7,000 votes to CPM’s P Karunakaran in 2014, there was around 50,000 bogus votes in favour of the LDF. “People elected Siddique but the CPM won with the help of bogus voting,” he said.
Siddique accepted the defeat because he could not produce evidence of bogus voting, Unnithan said. “Now the LDF’s mask has fallen,” he said.

Stay up to date on all the latest Kerala news with The New Indian Express App. Download now
TAGS
bogus voting Rajmohan Unnithan