THIRUVANANTHAPURAM: American singer Martina McBride’s ‘Concrete Angel’ ends this way: “A broken heart that the world forgot”. The power ballad was anchored on the theme of child abuse and the song ended with the most befitting line that carried all the pangs of the little broken hearts with whom the world forgot to empathise with.
Seventeen years down the lane after the ‘Concrete Angel’ hit the charts, Kerala, separated from the United States by several thousand miles and two oceans, could well stand as testimony of what McBride’s raspy voice then conveyed. Of broken hearts and a forgetful world! 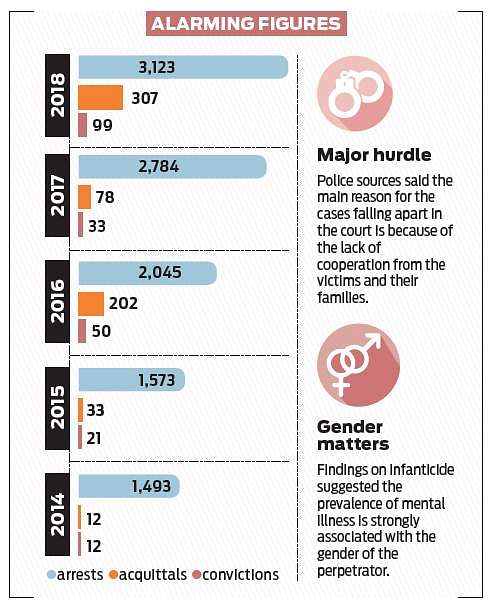 The public outcry and quick police action notwithstanding, the rate of successful prosecution has been abysmally poor in POCSO cases. As per the police data accessed by Express, in 2018, only 99 people were convicted, while a jaw-dropping 307 people were acquitted. The total number of the accused arrested in 2018 stood at 3,123, while the total number of accused was 3,702.  That means the conviction rate was less than 3.5 per cent of the total number of arrests.
Police sources said the main reason for the cases falling apart in the court is because of the lack of cooperation from the victims and their families.
“When the victims turn hostile in court, then we can’t do much,” said a senior police officer. “There are reasons for them doing so,” the officer said.

“In one of the cases registered in the state, the accused was the grandfather of the girl. He had a considerable sway over the family members due to his financial might and hence the girl’s parents were not interested to get him punished fearing they might be deprived of their share of the property by the old man. In most of the cases, the close family members were the culprits and hence there was a tendency of the victim and their parents turning hostile,” the officer added.
As per a study conducted by the Police Department based on cases registered in 2017, there was a prevalence of abuse being conducted mostly by immediate family members. A senior IPS officer told Express that in the first 15 cases that were registered in the state in 2017, the accused were the relatives who could claim custodianship of the victims.

“When we took up the 16th case, then only an outsider featured as a culprit,” the officer said.
As per rules, the chargesheet against the accused in POCSO cases should be submitted in six months time. And the trial period could last up to one-and-a-half years. Since the case has to be taken up for trial in a POCSO special court, the lack of such courts do hamper the proceedings. The rule that the chargesheets of POCSO cases should be vetted by Range Inspector Generals (IG) also made the matters worse. However, this rule was later amended after feedbacks from various corners.
The lack of Victim Liaison Officer (VLO) to support the victims during the trial also put a damper on the positive legal outcome.

As per a departmental circular issued last year, State Police Chief Loknath Behera had said that “In too many cases the medical officer records a picture which is very contradictory to that drawn in the First Information Statement (FIS).
This generates suspicion in the credibility of the FIS itself,” he had said.

Stay up to date on all the latest Kerala news with The New Indian Express App. Download now
(Get the news that matters from New Indian Express on WhatsApp. Click this link and hit 'Click to Subscribe'. Follow the instructions after that.)
TAGS
Concrete Angel