According to sources, the accused will be handed over a copy of the chargesheet and related documents when he appears before the judge.

KOTTAYAM: In a major development in the case pertaining to the nun’s rape complaint against Bishop Franco Mulakkal of the Jalandhar diocese, the Judicial First Class Magistrate Court in Pala has accepted the chargesheet submitted by the special investigation team (SIT) in its file.
The chargesheet and supporting documents - submitted by the SIT led by Vaikom DySP K Subhash - were accepted after preliminary verification. The court on Saturday issued a summons to Franco Mulakkal to appear before it on May 10. 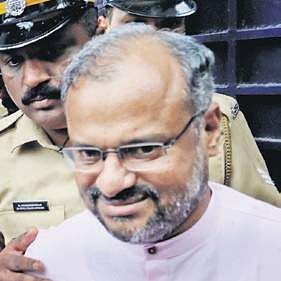 According to sources, the accused will be handed over a copy of the chargesheet and related documents when he appears before the judge. Later, the JFMC will commit the case to the Principal Sessions Court, Kottayam, taking into account the nature of the case and gravity of the crime. The trial will be conducted in the Principal Sessions Court and the accused will be issued another summons before that.

The chargesheet submitted by the SIT runs into more than 2,000 pages and includes three volumes. The Bishop has been arraigned an accused in the case under IPC Sections 342 (wrongful confinement), 376 (2k) (rape on a woman incapable of giving consent), 376 (2n) (causing grievous bodily harm during rape), 376 (c) (a) 377 (unnatural offence), 506 (1) (criminal intimidation) IPC Sections). If proven guilty, the Bishop may get a punishment of life imprisonment or minimum imprisonment of not less than 10 years.
Along with the chargesheet, the SIT also submitted 101 documents before the court. It has listed about 83 witnesses, including Major Archbishop Cardinal George Alencherry, Bishop Joseph Kallarangatt of Pala diocese, Bhagalpur Bishop Kurian Valiyakandathil and Bishop Sebastian Vadakkel of the diocese of Ujjain. The seven magistrates, who recorded the statements of witnesses, will also turn up as witnesses in the case.

Stay up to date on all the latest Kerala news with The New Indian Express App. Download now
(Get the news that matters from New Indian Express on WhatsApp. Click this link and hit 'Click to Subscribe'. Follow the instructions after that.)
TAGS
Bishop Franco Mulakkal Nun's rape complaint