Under the new plan being rolled out by the govt, landowners will be compensated, commensurate with rising property prices even after they part with holdings

KOCHI: Losing sleep over the rising value of the land you sell to the government for road and infrastructure projects once you part with the holdings? Hold on, the government has a new plan.

In its regulatory filing for ‘masala bonds’, Kerala Infrastructure Investment Fund Board (KIIFB) said its board has authorised CEO K M Abraham to draw up a scheme for the issue of land bonds, which will ensure the land owners enjoy future appreciation of the land value.

“Discussions have been held with revenue authorities and  government departments requiring land acquisition for their infrastructure projects. 20 approved projects require urgent land acquisition in an amount of 617 acres,” according to the filings, a copy of which is with ‘Express’.

The filing said it was resolved that the issuer will finance the acquisition of the 20 approved urgent projects through funds already available to it, prior to land bonds being issued.Land bonds have been used by several countries, including Brazil, Ireland, Jamaica and South Korea, to compensate those from whom land is acquired for government projects.

“Sometimes a key project gets delayed due to reluctance by one or two landowners to part with their patch of land. This may also get into legal tangles delaying the project by five-six years when the project can be completed in two-three years,” said a senior KIIFB officer.  “By issuing land bonds, the landowners can be compensated for the expected rise in property value after the project comes up.

A new flyover or a road may trigger a sharp spike in the land value in that area. The land bonds will ensure that the landowners enjoy the benefits,” the  officer said.According to her, the design of the land bonds is in the works and they may see the light of the day may be in another one-two years. “We need to see what should be the tenure of the land bonds etc,” she said.

The document said KIIFB  has the power, with the government’s prior sanction, to borrow and lend any sum required for the purposes of the KIIF Act, pursuant to Section 8 of the KIIF Act.For this purpose, KIIFB can issue any financial instrument, including revenue bonds with structured repayment mechanisms, land bonds and any other appropriate financial instruments, or by making arrangements with banks, multilateral funding agencies or institutions approved by the state government. 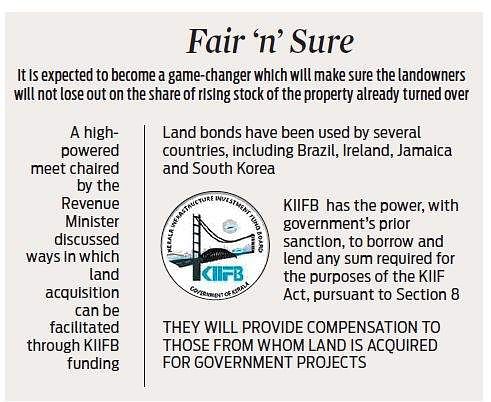 Stay up to date on all the latest Kerala news with The New Indian Express App. Download now
(Get the news that matters from New Indian Express on WhatsApp. Click this link and hit 'Click to Subscribe'. Follow the instructions after that.)
TAGS
Kerala Infrastructure Investment Fund Board KIIFB