Law to regulate playschools, creches on cards in Kerala

The Act, likely to be known as the Kerala Playschool, Creche Regulation Act, aims to ensure basic amenities for children and safeguard their rights.

THIRUVANANTHAPURAM: In an attempt to regulate the functioning of playschools and creches operating in the state, a legislation is on the cards. The Act, likely to be known as the Kerala Playschool, Creche Regulation Act, aims to ensure basic amenities for children and safeguard their rights.

According to sources, before introducing the Act, the government is likely to frame an operational guideline for playschools and creches and a mechanism to monitor them. It was following increasing incidents of child abuses from playschools and creches in the recent past that the government decided to draft such an Act and to come out with operational guidelines for them. 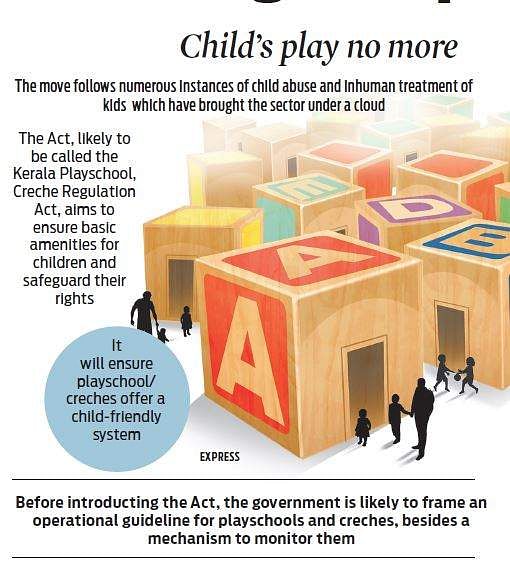 “The Right to Education Act sets certain norms for providing quality education, including the development of a curriculum, which will ensure the all-round development of the child. But its major limitation is that it is meant for children in the age group of six to fourteen years,” said Biju Prabhakar, special secretary, Social Justice and Women and Child Development Departments.

“The state government is of the view that, when it comes to children admitted to playschools and creches, those are their foundation years in terms of education and there is a need to build on the child’s knowledge, potential and talent. An act of this kind will guarantee the same,” he said.

According to him, a legal framework of this kind will help ensure that a child admitted to a playschool/creche gets a  child-friendly system and is received with child-centred learning.

“There is Maharashtra Pre-School Centres (Regulation of Admission) Act and a Regulatory Guidelines for Private Play Schools prepared by the Education Division of National Commission for Protection of Child Rights. While drafting the state-specific Act, we will consider these Acts and guidelines also,” added Biju Prabhakar.

At the same time, sources said, though a draft of the bill has been prepared, a meeting with various stakeholders, including experts in the field, will have to be conducted.

After incorporating their suggestions, it will be submitted to various departments, including the Law Department, for thorough vetting. Once the departments give their approval, it will be released in the public domain. After that, the Bill will be presented in the Assembly.