A few months ago, a team from Muziris Heritage Project visited Holland to know about their heritage conservation projects.

KOCHI: Chief Minister Pinarayi Vijayan’s ongoing visit to the Netherlands will immensely help the heritage projects in Kerala as the Dutch National Archives houses substantial documents on the state’s heritage.

The Netherlands government is already cooperating with Kerala in developing Unesco-backed Spice Route project which traces the state’s trade links with 33 countries.

A few months ago, a team from Muziris Heritage Project visited Holland to know about their heritage conservation projects.The Chief Minister’s visit to the Dutch National Archives is expected to bolster ties with the Netherlands, which in turn, will help in developing heritage sites in the state.

“The National Archives has 135 maps of Kerala belonging to 16th and 17th century. There is a 12-feet-long map in which even the coastal villages are marked. The Dutch authorities have agreed to hand over these to us. We will use them at the Muziris and Alappuzha Heritage sites,” said P M Noushad, Managing Director of Muziris Heritage project.

The Netherlands has expressed willingness to cooperate to develop Alappuzha and Muziris Heritage sites.
Dutch expertise in heritage conservation will help in setting up Port Museum in Alappuzha, which will have artefact from 33 countries.

Similarly, a team from the Netherlands also had submitted a report to the state government to manage the canals in Alappuzha city.The Netherland also had agreed for a knowledge exchange programme connecting researchers in Kerala with experts in Holland.

After the Chief Minister’s visit, a delegation for the Netherlands will arrive in Kerala, said a Tourism Department official. “The delegation will visit either Alappuzha or Muziris heritage sites. The delegation is likely to come in June or July,” the official said. 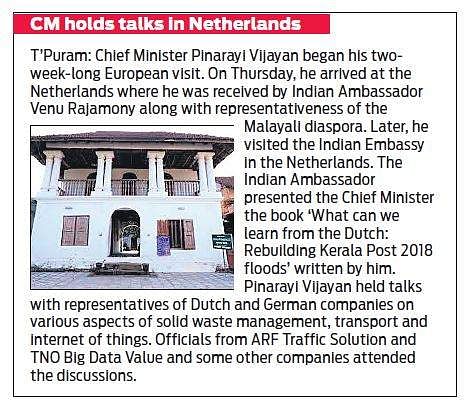