Almost all political parties have installed their flags in front of Santhivanam, expressing solidarity with the ongoing protest

KOCHI: With the KSEB expediting the construction of the 110 KV power transmission tower inside Santhivanam, the green activists have decided to form a human chain around the sacred grove on Tuesday, stressing their demand to remove the tower and protect the green refuge. Kerala Biodiversity Board former chairman V S Vijayan, environmentalists C M Joy, C R Neelakandan, Purushan Eloor and representatives of around 15 environment organisations will participate in the protest.

Meanwhile, the Kerala High Court will consider a plea against the destruction of the sacred grove on Tuesday. 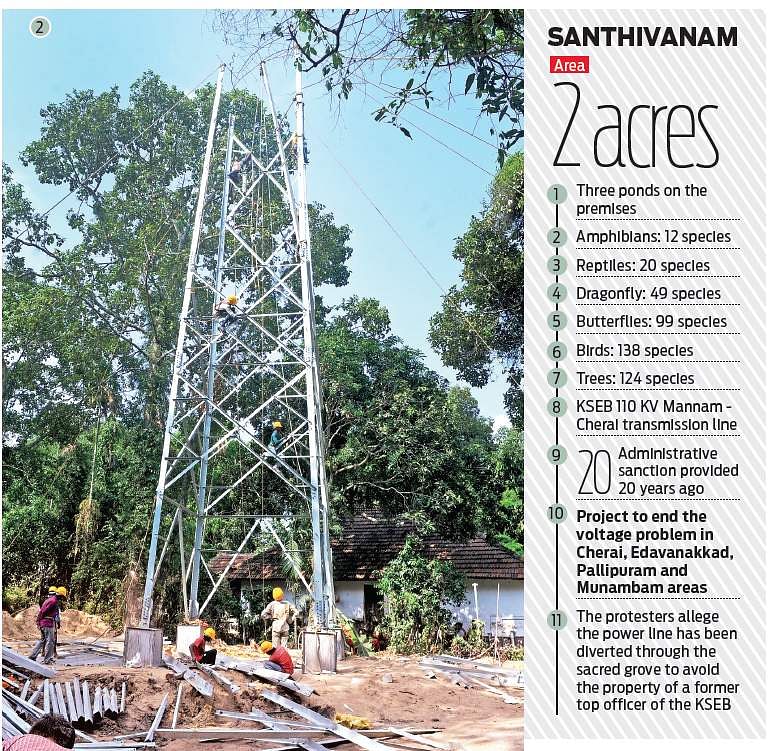 A cluster of flags welcomes the visitors at Santhivanam, a two acre refuge of greenery at Vazhikkulangara near North Paravur Taluk on National Highway 66. Almost all political parties, including the Congress, BJP, CPI, Janatha Dal, SDPI and Aam Admi Party, have installed their flags in front of Santhivanam expressing solidarity with the ongoing protest. An activist of the Santhivanam Samrakshana Samithi observes hunger strike in front of the entrance of the sacred grove. However, the protest is losing steam with the KSEB expediting the construction of the 110 KV power transmission tower.

Ignoring the protest, a dozen KSEB workers are busy constructing the 110 KV power transmission tower in the backyard of Thundaparambil House, where Meena Menon, the owner of the sacred grove lives. Around 15 police personnel including women cops have been posted at the site to thwart any attempt to obstruct the construction work.

“Our protest is peaceful and we will not resort to violence. Let the court decide,” said Meena with a grim smile.

“The KSEB released a statement claiming only three trees were cut. But actually they have chopped down 15 trees. The damage caused by  the destruction of the undergrowth and the flushing of slurry on the premises has been ignored. This grove plays a vital role in protection of the ecology. Apart from controlling air pollution, it helps to maintain the groundwater level. When they conducted piling work for the construction of the tower, the water level in the three ponds here started depleting. This grove offers a refuge for many birds, butterflies and reptiles. How will they compensate the destruction of ecology,” asks Meena.

With the KSEB set to complete the tower within a couple of days, the activists, who have rallied behind Meena have lost hope on saving the green refuge. “They have the support of the government and can distort facts to misguide the court. Now that the tower has been installed, the court may allow them to continue the work,” said an activist.

The KSEB officers said though they need 3 cents of land for erecting a tower, they are using only 0.62 cents for the tower considering the demand to protect the grove. “This alignment was selected years ago ensuring least damage to ecology and avoiding thickly populated areas. A change in alignment will further delay the project. The construction of the tower will be completed within four days,” said KSEB Assistant Executive Engineer S Pradeep.

Stay up to date on all the latest Kerala news with The New Indian Express App. Download now
TAGS
KSEB Kerala

Now you can WhatsApp for information on COVID-19 in Delhi