7 get life-term for pet shop owner’s murder; no parole for 25 years

Seven men convicted of murdering Renjith Johnson, a pet shop owner at Ayyarumukku in Peroor, have been awarded life imprisonment.

KOLLAM: Seven men convicted of murdering Renjith Johnson, a pet shop owner at Ayyarumukku in Peroor, have been awarded life imprisonment. The verdict delivered by the Additional District Court-4  Kollam on Tuesday specified that the convicts shall not be released on parole without undergoing a minimum prison term of 25 years.

The court also imposed a fine of `2 lakh each on the convicts. The money will go the parents of Renjith Johnson. The court had found seven men guilty of the crime on Monday. The conviction came nine months after the crime, making it one of the fastest convictions in a murder case. 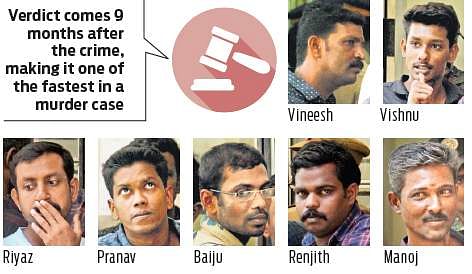 The convicted persons have been identified as Manoj, 48, alias Pambu Manoj, of Eravipuram, Renjith, 32, alias Kattunni, of Nedungolam, Baiju, 45, alias Kaithapuzha Unni, of Poothakulam, Pranav, 26, alias Kukku, of Decent Junction, Vishnu, 21, of Decent Junction, Vinesh, 44, of Kilikolloor and Riyaz, 34, of Vadakkevila. The court had acquitted Ajimsha, 37, of Kilikolloor, the eighth accused in the case.

The convicted have filed an appeal against their conviction in the High Court.
Manoj and Renjith became foes after the latter started living with the former’s wife nine years ago. Manoj and his accomplices abducted Renjith from his home on August 15, 2018. He was taken to Chathanoor and was murdered. Later the body was dumped in a landfill at Ponnankudi along the Nagarcoil - Tirunelveli road.

Theresa and Johnson, parents of Renjith Johnson, came to the court to hear the verdict being delivered. But they chose to stay on the ground floor and did not come to the court room on the first floor. They have a younger son other than Renjith.

The families of the convicts, including Manoj, were also present in the court during the proceedings. Public prosecutor K B Mahendran appeared for the prosecution. The defence team consisted of advocates C Rajendran,  B N Haskar, N Muhammed Nahas, U Vaheeda and Anees T.
The court appreciated the efforts of Kilikolloor SI (Crime) V Anil Kumar for submitting the chargesheet on December 1, 2018, the 82th day of taking the accused into custody.

As the chargesheet was submitted within 90 days of the arrests, the accused did not get bail. Based on intelligence report that Anil Kumar faced threat from convicts, who were lodged in a Thiruvananthapuram Central jail, a gunman was provided for his security since the trial started on February 13, 2019.

Stay up to date on all the latest Kerala news with The New Indian Express App. Download now
TAGS
Kollam murder Kerala