THIRUVANANTHAPURAM: A statewide raid by the Vigilance and Anti-Corruption Bureau covering 42 offices of the Food Safety Department unearthed several irregularities.The Vigilance team found that action was not taken on 434 of the 680 complaints received by the office at the General Hospital Junction in Thiruvananthapuram. The office was still waiting for report on 1,382 samples since 2012 and action had not been taken on 66 online applications for licence. 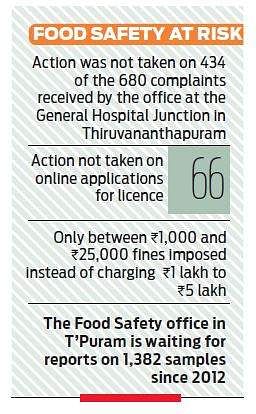 At the Chirayinkeezhu office, report was awaited on 83 of the 88 samples sent to the laboratory in the past two years. The raid found that the office had not even obeyed the directions by the District Food Safety Officer. The fine charged for several violations in Kannur, Malappuram, Adoor and Aranmula were much lower. In cases where the fine should be between rupees one lakh and five lakh, the officers charged only between Rs 1,000 and Rs 25,000. Moreover, complaints received were neither recorded in the register nor any action taken on them.

The Vigilance found that only a last grade staff was present at the Neyyattinkara office when the team reached there. At Ponkunnam, the team had to wait until 11.30 am for the office to open. The office had also failed to act in an incident in which stale milk was seized. Meanwhile, the raid recorded that an ice plant was functioning without licence under the purview of the office for the last two years.

At Kalpetta, officers failed to act on a lab report that had confirmed a bottled drinking water brand named Surabhi was unsafe. A complaint on adulteration in rice bought from a supermarket received on 12 April was neither recorded in the register nor acted upon. In another instance, Food Safety Department officers had not obtained laboratory reports on samples collected five years ago and no samples were collected in 2019. Samples collected in 2013 were not sent to the laboratory.

Action was also not taken on 39 of the 55 complaints received in 2019 as well as on the 19 samples collected by the Kasaragod office. In Kannur, Rs 4,500 unaccounted money was found in the assistant commissioner’s bag in a cover with his name.

The Vigilance team said most of the offices failed to maintain the register properly. The raid ordered by Vigilance Director Anil Kant was supervised by IG H Venkatesh.

Stay up to date on all the latest Kerala news with The New Indian Express App. Download now
TAGS
Vigilance and Anti-Corruption Bureau Kerala