Ensuring good marks in Class X or XII examination is passe. Now, scoring more A+ grades may not guarantee admission to the desired course or institution.

Ensuring good marks in Class X or XII examination is passe. Now, scoring more A+ grades may not guarantee admission to the desired course or institution. Reason? A liberal evaluation process that generates more A+ holders every year. Add to it, the unhealthy trend of awarding grace marks. As admissions are on, Express explores the options before students after their board exams.

KOZHIKODE: how many A+?,” a question every student who has cleared the Class X examination is tired of answering ever since the results were declared. The question has become so common these days that it seems passing the Board exam with anything lesser than a full A+ is irrelevant. But does it mean all is well if one scores A+ in all subjects? Welcome to the Higher Secondary admission scenario which will help shatter that myth.

During the single window admission process for the higher secondary course, a student who earns A+ in all subjects may find himself lower in the ranking when compared to say a student who gets A+ in seven or eight subjects. Wondering how that happens? That is where grace marks and bonus marks come into play.

Picture this: Rejith, a student from Kozhikode, had scored A+ in all subjects in the SSLC examination. With virtually no participation in extracurricular activities, Rejith’s marks were earned purely from academics. This, unlike some of his peers who bagged as much as 60 marks extra in the form of ‘grace marks’. These marks are awarded for participation in NCC, Scout and Guides, arts fest, sports meet and so on.

Imagine if Rejith has to get admission to the Higher Secondary course in a different district due to job transfer of his parent. He would be at a further disadvantage when compared to an already grace mark awarded student. Further weightage in the form of bonus marks, is given if a student who applies in the same school, same panchayat and same taluk.

This means Rejith may not be sure of getting the preferred subject combination and admission in the school of his choice due to the double advantage enjoyed by other students. Though such full A+ holders adorn the advertisements of coaching centres, they may not enjoy the advantage during admission to higher courses.

“For many years, this anomaly has been in place. Of course, awarding some bonus marks to a student who studies in the same school and the same panchayat is reasonable. But what about grace marks? Though the government has said it would do away with this unhealthy practice, which has remained a grey area for long, nothing much has happened,” said S Manoj, state general secretary of Aided Higher Secondary Teachers’ Association. Students of national boards such as CBSE and CICSE  have been consistently making a switch to the state syllabus after Class X over the past few years. Despite being at a clear disadvantage when compared to their SSLC counterparts, more than half of the students who pass CBSE and ICSE exams are getting admission in the state syllabus. Academics say it is the lure of fetching more marks in the Higher Secondary examination, as against the comparatively tough CBSE Class XII or ISC examination, is what triggers this exodus.

During the just-concluded academic year, the enrolment rate of CBSE students in the state higher secondary course was as high as 54 per cent. Of the 72,146 students who passed the CBSE examination from the state in the previous year, nearly 39,000 joined state syllabus schools. This has been a trend over the past couple of years. Recently, an ICSE school in Malappuram was in the dock after it demanded an exorbitant sum from students who sought transfer from the school to state syllabus schools after Class X.

Taking into account the possible exodus of students after Class X, many schools affiliated to the national boards have kept only bare minimum seats for Plus-II course. “My son was expected to score above 90 per cent. But when the CBSE Class X results came, he had scored only 83 per cent. Though we wanted him to pursue science stream in the same school, he was refused admission The school said Plus-II course in science was available only for those students who scored more than 90 per cent marks,” said Shinoj, a parent.

“We tried to shift him to a government school with a good track record. To our shock, we realised that getting admission for the desired course there with 83 per cent marks was tougher. There are no grace marks for CBSE, neither do such students enjoy bonus marks during admission. So we settled for humanities in the same school against the wishes of my son,” he added.

CBSE school managements have denied any discrimination towards low scoring students during admission to Plus-II in the same school. “Where a student should study after Class X is the sole prerogative of the students and parents. No CBSE school encourages a shift to the state syllabus. In fact, most of the schools have the provision to accommodate all students who pass Class X in the same school for the Plus-II course,” said Indira Rajan, general secretary, National Council of CBSE Schools. 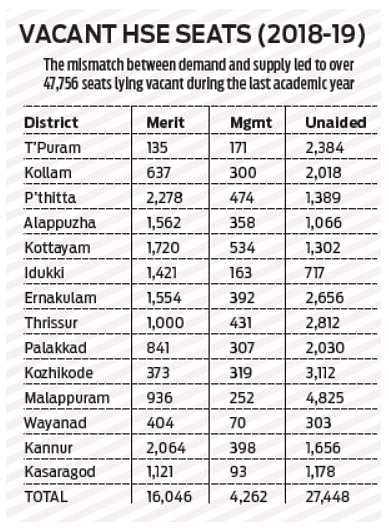 Stay up to date on all the latest Kerala news with The New Indian Express App. Download now
TAGS
Kerala schools