After flood and summer blues, Keralites look for canopy of trees

The great deluge that devastated the state in August last year and the harsh summer that followed have helped to create a consciousness among the Keralites on the need to plant more trees.

KOCHI: The great deluge that devastated the state in August last year and the harsh summer that followed have helped to create a consciousness among the Keralites on the need to plant more trees.

With the greens campaigning that rampant destruction of the green belt has aggravated the effects of global warming leading to extreme weather changes, there is a new-found enthusiasm among the public to plant trees.

According to sources, the Social Forestry Department has been flooded with phone calls from schools, colleges, government departments, religious organisations, NGOs and corporates booking saplings to be planted on June 5, the World Environment Day.

“We have raised around six lakh saplings to meet the demand in Ernakulam district, but the demand has been overwhelming. The government and aided schools in the district alone have booked around 3 lakh saplings and there are enquiries from various government departments and local bodies,” said Ernakulam Social Forestry Range Officer M K Renjith.

Across the state, the Forest Department has kept around 70 lakh saplings ready for distribution on June 5, but it seems the department will not be able to meet the increasing demand this time.

“In the Central Region, we have raised around 47.64 lakh saplings for distribution. We had limitations in collecting the seeds due to the deluge. But we brought the seeds from Bengaluru and Shivamogga in Karnataka, Tamil Nadu Agricultural University Seed Centre in Coimbatore, Wayanad and other parts of Kerala. The fund is from the Rs 14 crore earmarked for extension activities of the department. We employed contract workers to raise the saplings,” Conservator of Forests (Social Forestry) M S Jayaraman told Express.

The department will be distributing 30 varieties of saplings including medicinal plants, fruit-bearing trees, flowering trees, timber species and trees that can stop coastal erosion. 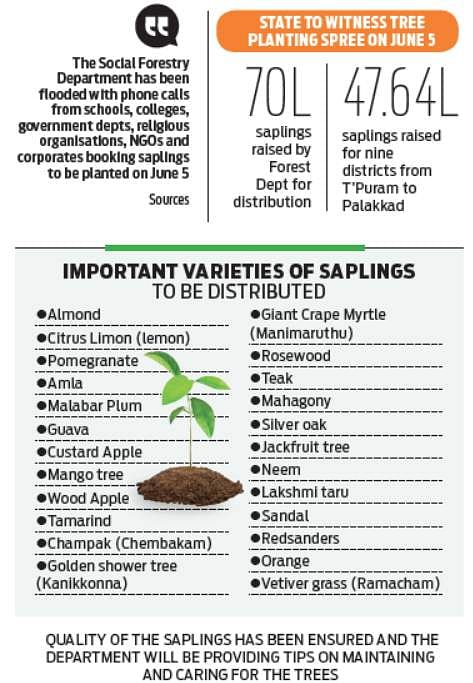