THIRUVANANTHAPURAM: Majority of the exit polls has predicted a landslide for the UDF in the state in the Lok Sabha elections. While agencies commissioned by Times Now, News X, India Today, News Nation, Malayala Manorama and Mathrubhumi predicted UDF victory, CNN News 18 gave LDF the edge. Sources said the presence of Rahul Gandhi in Wayanad had resulted in minority consolidation in the state in UDF’s favour. State Congress president Mullappally Ramachandran told Express: “We’re confident of UDF’s victory with a huge margin. The anti-people policies of the LDF Government in the state and that of Narendra Modi at the Centre have led the people to favour the UDF.”

Exit polls can be off the mark, says Mullappally
With the exit polls indicating a Congress drubbing at the national level, its leaders are not totally subscribing to the predictions.“Exit polls can be off the mark, but the Congress is sure the party will win hands down in the state. Our feedback is that UDF will win all seats,” said Mullappally.Congress leadership in its analysis at the Political Affairs Committee anticipated a clean sweep for the front.

“The committee in its meeting on May 14 found the UDF would win all seats, much better than what’s predicted by the exit polls,” said a senior party leader.BJP state president P S Sreedharan Pillai too was optimistic of a good show by NDA.“The exit polls have predicted that BJP will do extremely well at the national level and NDA would open its account in the state. My reading is that we’ll do much better than what the exit polls have predicted. It was a collective effort in Kerala and credit goes to the party workers at the grass-root level.”

Alliance with BDJS helped BJP
BJP state leadership, in its analysis conducted across the state from May 10 to 18, had found the alliance with the BDJS leadership helped it gain the Ezhava votes in several constituencies and helped it eat into the CPM vote base.With all polls predicting BJP opening account in the state, party leaders are in touch with the RSS state leadership discussing future moves. Sources said if it wins the seat and NDA comes to power at Centre, he/she is sure to get a Cabinet berth. 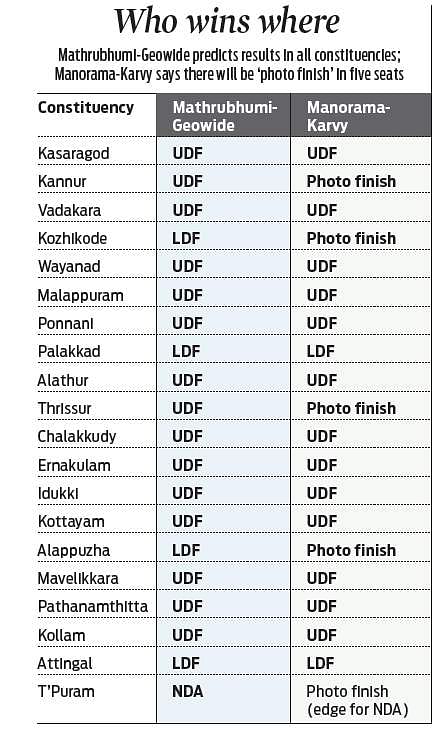 Stay up to date on all the latest Kerala news with The New Indian Express App. Download now
(Get the news that matters from New Indian Express on WhatsApp. Click this link and hit 'Click to Subscribe'. Follow the instructions after that.)
TAGS
exit polls UDF Lok Sabha Elections LDF NDA