THIRUVANANTHAPURAM: The state’s tourism sector, hard done by the Nipah scare and the mid-August floods last year, is eyeing the forthcoming monsoon season to revive its fortunes.

By capitalising on the appeal of Kerala monsoon, the Tourism Department is also looking to woo back the international tourists, especially those from West Asia, who gave preference to destinations like Colombo and Bangkok in the past couple of years.

As a step in this direction, the department participated in a tourism fair in West Asia last month. It is now planning to bring bloggers from Gulf countries to Kerala as part of promoting ‘Destination Kerala’, especially Wayanad, to cover Splash, the monsoon carnival. 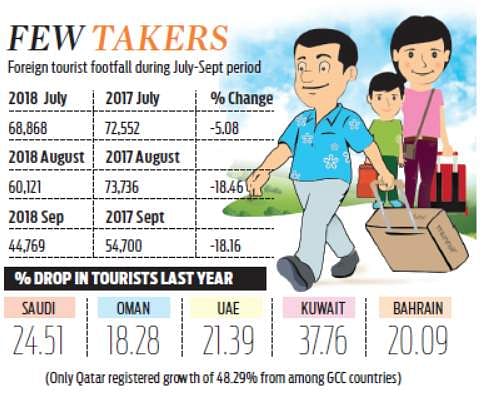 This is in addition to Bloggers Express, the initiative under which international bloggers tour the state.
Tourism Secretary Rani George told Express the Tourism Department was promoting the state nationally through the campaign ‘Human by Nature’, which, according to its description, “finds magic in the every day and eternity in the ordinary.”

“The department is also organising a plethora of programmes this year, including the Nehru Trophy boat race which was cancelled last year due to the floods, besides regattas every week till the end of the season. The Nishagandhi music festival and special bloggers’ ride across the state are among the other events billed for this season,” George said.

National Tourism Advisory Board member Abraham George said tourist flow to Kerala may increase due to the present scenario in Sri Lanka.

“The state government should ensure some things to strengthen the inflow. The visa-on-arrival facility for tourist from West Asian countries, especially Saudi Arabia, needs to be arranged,” he said.

He said airfare hikes also affected the footfall of domestic tourists during the summer vacation this year.
“Hotels in Munnar only witnessed 60 per cent occupancy so far this month against 100 per cent in May last year due to the hike in airfares, which was caused by the grounding of Jet Airways, ban on the Boeing MAX aircraft and the cancellation of IndiGo flights,” he said.

Stay up to date on all the latest Kerala news with The New Indian Express App. Download now
TAGS
Kerala Tourism

Meet Covid and Corona -- twins born during the lockdown in Chhattisgarh