THIRUVANANTHAPURAM: The ambitious petrochemical park proposed to be set up in Kochi has once again taken a hit after Fertilisers and Chemicals Travancore Ltd (FACT) sought more time to hand over the land required for the project to the state government.

The state, in turn, extended the validity of the MoU signed between FACT and the government for the purchase of about 600 acres of land owned by FACT to develop the Petrochemical Park by Kerala Industrial Infrastructure Development Corporation (Kinfra), by another six months.

This is the fourth extension after FACT failed to hand over the land to the state government as per the agreement. 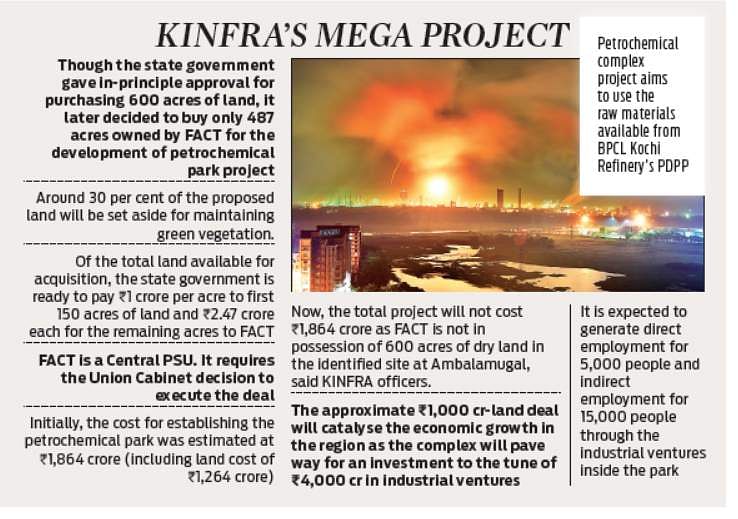 According to an order by Industries Secretary Sharmila Mary Joseph, the state extended the validity of the MoU for six months with effect from April 1, 2019, to September 30, 2019.

“The state government is ready to take over the land once the Centre gives permission to acquire it. The delay in giving green signal for land acquisition is affecting the project. Earlier, the Centre had given approval for the ‘purchase’ of the land by the state government. But in such a scenario, FACT will have to pay tax to the government for the transaction of the land deal,” said sources close to Kinfra.

“Following this, FACT sought permission from the Centre to allow the state government “acquire” the land which would help FACT avoid tax liability. But the Centre is yet to give consent for the new proposal which is now literally delaying the project,” Kinfra sources said.

Meanwhile, the first phase of the Propylene Derivatives Petrochemical Project (PDPP) of the BPCL, conceived as part of the Integrated Refinery Expansion Project in Kochi Refinery, will be commissioned in a few months.

The petrochemical park, which envisages housing micro, small and medium downstream petrochemical units, was conceived with an aim of using the raw materials available from BPCL Kochi Refinery’s PDPP. The MoU, signed in December 2017, said all proceedings pursuant to MoU will be completed by March 31, 2018, but the project is still getting delayed even two years after the MoU was signed.

Stay up to date on all the latest Kerala news with The New Indian Express App. Download now
(Get the news that matters from New Indian Express on WhatsApp. Click this link and hit 'Click to Subscribe'. Follow the instructions after that.)
TAGS
Kinfra Petrochemical Park FACT