In the 2014 parliamentary polls, Rajesh had won by more than 1 lakh votes and secured a lead in six out of seven Assembly segments in the Parliamentary constituency by a wide margin.

By A Satish
Express News Service

PALAKKAD: t was a defeat the Left Front wasn’t prepared for - the defeat of sitting MP and LDF candidate M B Rajesh at the hands of UDF candidate V K Sreekantan from the Palakkad Lok Sabha constituency. 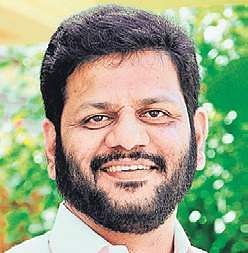 Not even the exit polls that had given the UDF a clear majority in the state had predicted a UDF win from the seat. In fact, the LDF had been sure Rajesh would win under any circumstances.
A broad analysis of the results points towards minority consolidation against the Narendra Modi Government at the Centre for the UDF win.

The voters, it seems, were hurt by the LDF going overboard on the Sabarimala issue and also by the cold-blooded killing of political opponents by the CPM. The candidature of Rahul Gandhi in nearby Wayanad also swayed voters.

Rajesh’s defeat is also indicative of how deep the enmity between the two groups in CPM was. When Shoranur MLA P K Sasi got embroiled in a case of alleged sexual misconduct, the needle of suspicion of helping the DYFI woman leader – the victim – in airing her grievances to the higher echelons of CPM had pointed towards Rajesh, a former national president of the DYFI.  There was a lot of bad blood between leaders. However, being a cadre-based party, the undercurrents of mutual animosity between rival groups in the CPM were never visible to the people.

In the 2014 parliamentary polls, Rajesh had won by more than 1 lakh votes and secured a lead in six out of seven Assembly segments in the Parliamentary constituency by a wide margin.

Stay up to date on all the latest Kerala news with The New Indian Express App. Download now
(Get the news that matters from New Indian Express on WhatsApp. Click this link and hit 'Click to Subscribe'. Follow the instructions after that.)
TAGS
V K Sreekantan LDF UDF