NOTA votes dip by one lakh

Votes under NOTA (None of the Above) option saw a considerable dip in this year’s General elections than the 2014 Lok Sabha polls. 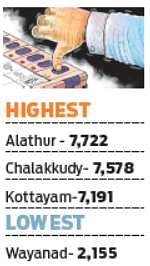 In 2014, most NOTA votes were cast in Malappuram at 21,829, followed by Alathur at 21,417 and Pathanamthitta at 16,538.
NOTA votes had also played a decisive role in the Kannur and Vadakara constituencies in 2014, as they exceeded the winning margin in the two seats.

Stay up to date on all the latest Kerala news with The New Indian Express App. Download now
TAGS
NOTA 2019 Lok Sabha polls