The Sabarimala issue, that hurt the sentiments of the devotees had created discontent among the Hindu majority, which was considered the vote base of the CPM.

KOCHI: Did the BJP supporters cast their votes in favour of UDF candidates in key constituencies to ensure the defeat of their bete noire CPM? A close look at the voting pattern in CPM bastions reveals a steep decline in BJP votes which points to a possible transfer of votes. 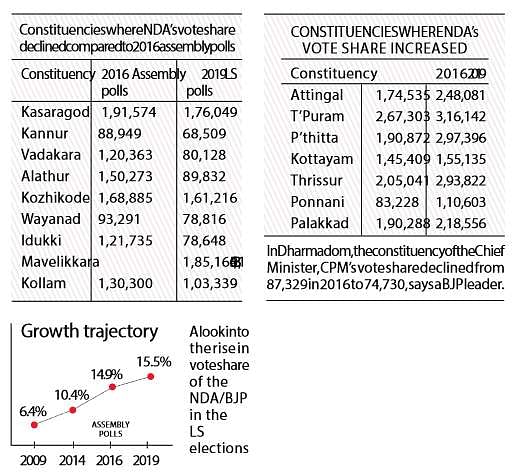 However, it seems, there is a steep decline in BJP votes in constituencies like Kasargod, Kannur, Vadakara, Alathur and few others where the opinion polls suggested a victory for the LDF candidates.

The Sabarimala issue, that hurt the sentiments of the devotees had created discontent among the Hindu majority, which was considered the vote base of the CPM. According to Sabarimala Karma Samithi leaders, many families, who were staunch supporters of the CPM parted ways with the party after the Sabarimala agitation.

The BJP was expecting a steep increase in its vote share in view of the possible polarisation of majority votes. However, the party’s vote share increased only marginally, leaving the leaders disenchanted.

According to BJP leaders, the devotees who were annoyed by the CPM stand on Sabarimala issue cast their votes in favour of the UDF candidates to ensure the defeat of the CPM. This shift in votes has poured cold water on the poll prospects of the BJP at least in Thiruvananthapuram and Pathanamthitta.

“Discontent was brewing among the traditional vote base of the CPM over the handling of the Sabarimala issue. We hoped this will help us cross the 20 per cent mark in vote share. But a major chunk of the votes went to the UDF as they thought only the UDF can spoil the chances of the CPM,” said a senior BJP leader.

“It is not our votes that got drained. A section of the traditional voters of the CPM voted for the UDF to ensure the defeat of the CPM leaders.

There was an anti-Pinarayi wave in the state and the UDF benefitted from it. In Palakkad, the discontent among the supporters of the CPM over the Sabarimala issue was evident,” said BJP spokesperson B Gopalakrishnan.