The UDF tsunami that decimated the Left Front in the Lok Sabha polls is proving to be more cause for worry to the LDF.

THIRUVANANTHAPURAM: The UDF tsunami that decimated the Left Front in the Lok Sabha polls is proving to be more cause for worry to the LDF. Apart from being reduced to just one seat, the LDF also lost around 8 per cent of its vote share, compared to the 2016 Assembly elections when it won 91 seats. 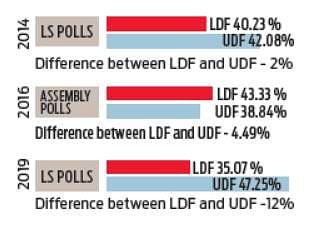 The LDF, which bagged the upper hand in 91 Assembly constituencies in 2016, managed a majority in only 16 Assembly segments of the parliamentary constituencies in the state, this time around. In constituencies like Attingal and Alathur, the difference in vote share was very evident. In Thiruvananthapuram, where the Sabarimala issue had created major ripples, the Congress candidate Shashi Tharoor won a majority in CPM’s sitting Assembly segments like Kazhakoottam, Neyyattinkara and Parassala. In Kazhakoottam -the sitting seat of CPM Minister Kadakampally Surendran- Left candidate C Divakaran was pushed to a pathetic third spot.

Similarly, in the Attingal Lok Sabha constituency, considered to be a Left stronghold from where the LDF had won six of the seven Assembly segments in 2016, Left candidate A Sampath was pushed to the second position in six Assembly segments. Only in Nedumangad - the sitting seat of C Divakaran - Sampath could come first, that too with a meagre margin of around 700 votes.

The UDF’s foray into Left bastions like Palakkad and Alathur has caused shock waves in the Left camp. In Palakkad’s Pattambi Assembly segment, which is the CPI’s sitting seat, UDF’s V K Sreekandan polled 67,644 votes while LDF’s M B Rajesh could win only 50,465 votes. In 2016, CPI’s Muhammed Muhassin had won around 45.84 per cent of the votes here.