KOCHI: SDPI’s claim that they had supported Congress-led UDF in Lok Sabha polls has strong validity if one analyses the result in constituencies where the party decided not to field their candidates and support the UDF.

The SDPI votes plummeted to just SDPI’s claim that they had supported Congress-led UDF in Lok Sabha polls has strong validity if one analyses the result in constituencies where the party decided not to field their candidates and support the UDF.  80,000 votes this time from 2.73 lakh votes secured in 2014 indicating that the party has transferred all votes in favour of the UDF candidates in Kasaragod, Pathanamthitta, Thiruvananthapuram, Kollam, Idukki, Kottayam and Thrissur. 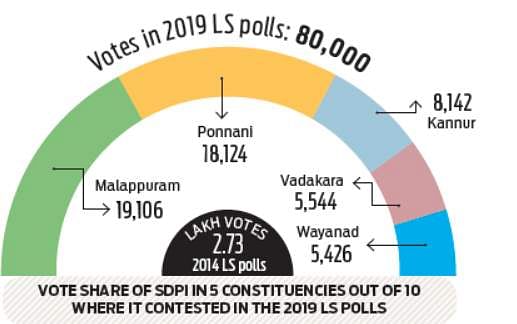 SDPI Kerala state president Abdul Majeed Faizi has also announced that their party cadre supported the UDF candidates. The SDPI decided to support UDF after its relationship turned sore with the CPM leadership which came down heavily on the SDPI for its alleged terrorist activities.

This election, the SDPI leadership chose not to field candidates in these constituencies and the UDF managed to come out with a thumping victory in Kasaragod, Idukki and Thrissur which were sitting seats of the CPM, most importantly Kasaragod constituency which was held by LDF for the last 30 years. In fact, the relation between SDPI and the CPM worsened in 2018 when Students Federation of India (SFI) leader Abhimanyu of Maharaja’s College was allegedly murdered by SDPI workers on the college campus on July 1.

Stay up to date on all the latest Kerala news with The New Indian Express App. Download now
(Get the news that matters from New Indian Express on WhatsApp. Click this link and hit 'Click to Subscribe'. Follow the instructions after that.)
TAGS
SDPI LDF UDF Kerala Lok Sabha elections 2019 Lok Sabha Results 2019