With the byelection to be held in six months, Congress has started informal discussions on the candidate to be fielded from the seat.

THIRUVANANTHAPURAM: KPCC general secretary Padmaja Venugopal and  Youth Congress former general secretary R V Rajesh have emerged as front-runners for the Congress’ candidate in the Vattiyoorkavu assembly seat. The bypoll in the constituency has been necessitated by sitting MLA K Muraleedharan’s election as Vatakara MP.

While K Muraleedharan has always been a very popular legislator, the party has to weigh the pros and cons before selecting his replacement. With the byelection to be held in six months, the Congress has started informal discussions on the candidate to be fielded from the seat. 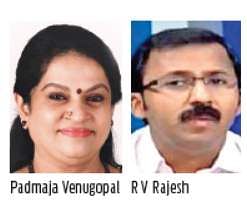 The party is expected to field a candidate from the Nair community which has a dominant presence in the constituency.  Besides being a woman leader, Padmaja is the sister of K Muraleedharan and daughter of former Chief Minister, the late, K Karunakaran who had a lot of goodwill among voters in the constituency. The Congress leadership wants to capitalise on this factor as well as on the advantage of her being the sister of K Muraleedharan.

R V Rajesh is currently a KPCC executive committee member. Earlier, he was a Youth Commission chairman and Youth Congress  state general secretary and vice-president. It may be recalled that it was K Karunakaran who had fielded V S Sivakumar - while he was Youth Congress district president - from the Thiruvananthapuram  Lok Sabha constituency. He won the seat comfortably. Political analysts are of the opinion that in a similar vein Rajesh can be a giant killer if he is fielded  from Vattiyoorkavu.
Other names which are in the reckoning from the seat are former Travancore Devaswom Board (TDB) president Prayar Gopalakrishnan and trade union leader- former MLA  Palode Ravi.

Now we are on Telegram too. Follow us for updates
TAGS
Padmaja Venugopal KPCC Youth Congress