Ahead of the arrival of monsoon, Express visits areas affected by the August-2018 deluge to assess the ground situation and understand people’s apprehensions about the coming rainy season. In the firs

CHERUTHONI: As dark clouds gather on the horizon, signalling monsoon is around the corner, the residents of Vimalagiri, a hamlet near Thadiyambadu located just 2 km downstream Cheruthoni dam, get nervous. Scenes of crumbling hills and gushing water that swept away lives snatched their livelihood, pulled down houses and pushed thousands into relief camps are still afresh in their minds.

“Last year’s landslides were nightmarish. We’ve never witnessed such massive destruction. The earth slipped by 10-20 feet in this area and cracks have appeared on the terrain above it. There’ll be more landslides if it rains heavily again this year,” said Baby, a mason at Vimalagiri.

Eleven days of tempestuous rainfall, from August 7 to 18, pummelled Idukki district, triggering a series of landslides and earth flow, filling dams and forcing authorities to open the flood gates. According to the KSEB, Idukki district received 1,419 mm rain from August 1 to 19 --- nearly three times more than the average rainfall during the period.

For the first time since Idukki dam was constructed, water came gushing down the Cheruthoni River with fury sweeping away the vegetation on the river bed, which was encroached over the years, pulling down the houses located on its banks and leaving a trail of death and devastation. 59 lives were claimed in the district and livelihood of thousands snatched. 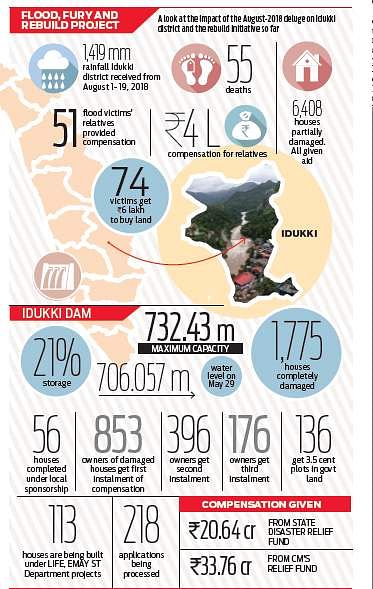 “We spent 15 days in the relief camp and lived in a rented house for eight months. The government will provide Rs 4 lakh for purchase of land if we find one, register it and produce the tax receipt. But some middlemen have purchased the land and its value has gone up. We had found a five-cent plot and fixed the deal for `90,000/cent two weeks ago. Last week the owner demanded Rs 1.10 lakh/cent and a day before registration he increased it further to Rs 1.20 lakh. We were forced to drop the plan,” said Surendran of Vellakkattu, who runs a hotel on the banks of Cheruthoni river.

He and his wife Sujatha were living in a small hut, also on the banks of the river, which was damaged in the flood.

“The government hasn’t even reconstructed the roads that were damaged by floods. There were complaints about the selection of beneficiaries. Though we approached the District Collector, there was no attempt to ensure transparency in the distribution of compensation. The people who lost their land are still living in rented houses. There’s widespread resentment over the flood relief operation, which led to the huge victory margin of Congress candidate Dean Kuriakose,” said former Block Panchayat president and DCC secretary AP Usman.

However, Prasanth, an officer at the District Disaster Management Authority, said the government has distributed Rs 54.4 crore as compensation till date.

“We’ve ensured all precautionary measures to avoid disaster during the monsoon season. The pre-monsoon cleaning drive was conducted on May 11 and 12. The District Collector has convened a meeting of the Disaster Management Authority on Saturday in which all department heads will participate. We’ll open a 24x7 control room at the district headquarters when the monsoon begins,” he said.

Stay up to date on all the latest Kerala news with The New Indian Express App. Download now
TAGS
Cheruthoni monsoon Cheruthoni dam