Though there was no confirmation from Joseph and Joy about the letter, leaders of Mani faction came down heavily on them over the reported move.

KOTTAYAM: Even as the fight within the Kerala Congress (M) over electing its new chairman and parliamentary party leader turned intense, reports that party general secretary Joy Abraham handed over a letter to the Election Commission (EC) confirming PJ Joseph as the party chairman stirred up a hornet’s nest on Wednesday. 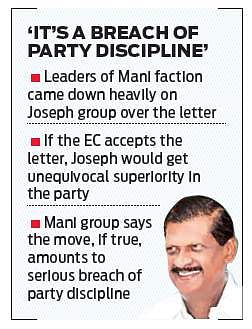 Though there was no confirmation from Joseph and Joy about the letter, leaders of Mani faction came down heavily on them over the reported move. Joseph group leaders refused to comment. As per reports, Joseph was mentioned in the letter as chairman and Joy as secretary in charge of organisation, which was interpreted as a strategic move by the former to take over the party reins. If there is such a letter and the EC accepts it, Joseph would get unequivocal superiority in the party.

When contacted, Joy said he would neither confirm nor deny the reports. Mons Joseph, the prominent leader in the Joseph faction, said he was unaware of the letter and added the reports have to be verified.
Meanwhile, MLAs Roshy Augustine and N Jayaraj, who owe allegiance to Jose K Mani, criticised Joseph over the letter.

At a press meet held during the interval of the assembly session in Thiruvananthapuram, Roshy said the move, if true, amounts to serious breach of party discipline.“Joseph should clarify whether he submitted a letter to the ECI. If it’s true, it’s a move to sabotage the party constitution,” said Roshy.

Meanwhile, protest is growing against Joy Abraham in Kerala Congress (M) strongholds. Youth Front (M) burned Joy in effigy following a protest march in Pala on Wednesday. It is learnt Aadikkad Manoj, who had taken the chairman election to the court earlier, has written to the EC seeking the details of Joy’s letter.