Caste no Bar, only in theory...

Though Kerala has been hailed a progressive state, caste and religion continue to create barriers around the common man laying restrictions on personal freedom.

Though Kerala has been hailed a progressive state, caste and religion continue to create barriers around the common man laying restrictions on personal freedom. Though there were not many cases of honour killing in the state, inter-caste and inter-religious marriages continue to invite the wrath of society. Dalits still face discrimination from the affluent classes. Express takes a look at the social realities that pose a challenge to free thinkers and the underprivileged

KOCHI: A year after the death of Kevin P Joseph, a 23-year-old Dalit Christian from Nattassery in Kottayam district, who was done to death for falling in love with a Syrian Christian woman, the Kottayam Principal Sessions Court held that it was an act of honour killing. The death of Kevin has posed some serious questions to Kerala society, which claims to be literate and progressive. It points to the fact that even after the reformation movement that culminated in the Temple Entry Proclamation of 1936 and the social upheaval that helped bloom the much-touted Kerala model of development, the caste system still exists.

It is not the first time the state is witnessing incidents of honour killing. In 2001, Balakrishnan, a 29-year-old Youth Congress worker in Kasaragod district, was stabbed to death for marrying a Muslim woman. The CBI court in Kochi had convicted two persons in the case in May 2018. 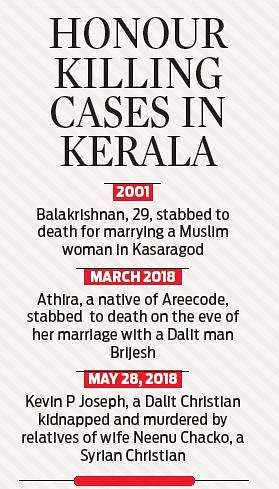 According to social workers, misinterpreted notions about caste superiority, false pride on family ancestry and difference in socio-economic status have led to conflicts when it comes to inter-caste or inter-religious marriages in Kerala.

However, the influence of the all-pervading caste system is evident in all walks of life. It is the members of the Scheduled Caste and Scheduled Tribe community, who were kept away from the social mainstream for centuries, that bear the brunt of caste abuses, discrimination and made to live in insecurity, indigence and deprivation.

Even when they strive to climb the social ladder, the establishment poses hurdles to Dalits in their struggle to attain recognition.

Muraleedharan who could have risen to the post of principal secretary still works as a deputy collector on deputation. He has been transferred 105 times during the past 30 years and even an official vehicle is denied to him.

A member of Velan community, Muraleedharan is a native of Tripunithura in Ernakulam district. Frivolous allegations like accepting bribe from a lorry driver have been raised to deny him promotion.
In July 2018, when Kerala was fighting the worst flood of the century, we encountered the most disgusting face of caste discrimination when a section of the flood victims refused to share space and food with Dalit families. As many as 23 Dalit families and 27 Christian families were accommodated in the relief camp at Anjilimoodu School in Pallippad panchayat of Alappuzha district as the floodwaters inundated the whole panchayat. However, the Christian families refused to stay in the same camp along with the Dalits and were provided with a separate relief camp. While intolerance and ostracism, which form the first stage of caste discrimination, are common in Kerala, incidents of honour killings are on the rise, which pose a challenge to Kerala, a society that brags about progressive mindset, said Kerala University Faculty of Social Sciences Dean Shaji Varkey.

“There are castes that ostracise families that marry outside the community. The same political parties that make tall claims about progressive mentality, social justice and equality are extremely conservative when it comes to caste and religion. To appease their vote bank, these political parties support the caste and religious leaderships who issue ‘Fatwas’ restricting freedom of the members of the community. Kerala has lost the progressive values that we earned through a series of struggles, which offered a beacon of hope to the whole country,” he said.

Religion and caste have tightened their grip over society imposing restrictions on personal freedom, said Shaji Varkey. “The Sangh Parivar, the Islamic fundamentalists and various cults in Christianity are taking us back to the dark ages. Religion has become rigid and there is no freedom for individuals to interpret faith in their own way. The religious leaderships have cultivated a fear psychosis among the faithful that religious education is gaining importance than ever before,” he said. Though communities and families discourage inter-caste and inter-religious marriages, the relationship is often accepted if the spouse is wealthy. However, the forward castes in the Hindu community and Christian and Muslim families never accept a relationship with a Dalit family, said Shaji Varkey.

The politicians who mixed religion and caste with politics are responsible for the growing caste discrimination in Kerala society, said activist-writer Sarah Joseph. “The political parties have been cultivating vote banks at the cost of our progressive values. This has provided the caste overlords with the power to bargain with the ruling dispensation. This has resulted in the loss of liberal and scientific outlook in our society,” she said.

Meanwhile, the attempts made to impose progressive ideology among the community that sticks to the tradition have been counterproductive, said Sarah Joseph.

While we have been able to put an end to untouchability, the invisible wall of discrimination that includes social ostracism, economic boycott and a generational cycle of social exclusion and marginalisation persist in society, said V R Joshi, Former Director of Backward Communities Development Department. “Caste works in the corridors of power in the most mysterious way. People who professed that reservation has denied a level playing ground to the talented have fallen silent after the government introduced 10 per cent reservation for the forward castes. Around 99 per cent of the matrimonial advertisements carried by leading newspapers will say that the person belongs to a reputed ancestral family. Some advertisements will say ‘Caste no bar (SC/ST excuse). This reveals our casteist mindset,” he said.

Caste system to blame
The influence of the all-pervading caste system is evident in all walks of life. It is the members of the Scheduled Caste and Scheduled Tribe community, who were kept away from the social mainstream for centuries, that bear the brunt of caste abuses, discrimination and made to live in insecurity, indigence and deprivation.

The irony
Over 99 per cent of the matrimonial ads in leading newspapers will say that the person belongs to a reputed ancestral family. Some advertisements will say ‘Caste no bar (SC/ST excuse). This reveals our casteist mindset, says V R Joshi.

Now we are on Telegram too. Follow us for updates
TAGS
Caste system caste based discrimination Kerala Kerala Muslims Kerala Christians Hindus