ALAPPUZHA: History was repeated after nearly six decades in the Nehru Trophy Boat Race (NTBR). The Nadubhagom chundan rowed by Pallathuruthy Boat Club lifted the prestigious trophy after a gap of 67 years. In 1952, Nadhubhagom chundan rowed by Nadubhagom Boat Club led by Chacko Mappila lifted the first trophy and the then Prime Minister Jawaharlal Nehru jumped on the boat, immortalising those moments in the history of the regatta.

There were six heats and the CBL competitions were held in three. The nine snake boats, which reached the finishing point in the shortest time in the 2018 NTBR contested in the maiden CBL. The nine snake boats which took the shortest time to reach the finishing point in this year’s Nehru Trophy qualified for CBL’s 2020 edition.

The league, with prize money totalling `5.9 crore, will see nine teams rowing for top honours.
There are 12 races in CBL that concludes on November 23. The first three winners of each CBL match gets `5 lakh, `3 lakh and `1 lakh respectively. All participants are entitled to a bonus prize of `4 lakh per match. 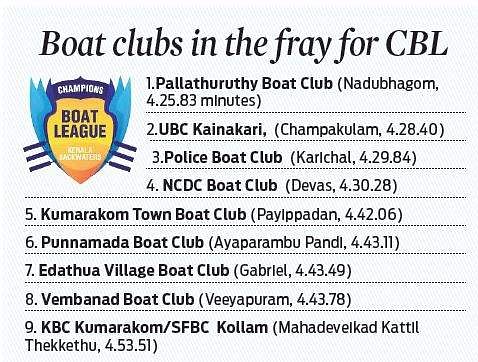 Now we are on Telegram too. Follow us for updates
TAGS
Nehru Trophy