Jayachandran said he would file a complaint with the Principal Chief Conservator of Forest (PCCF) on Wednesday demanding action against the temple authorities.

KOCHI: Parading of three temple elephants to accord a grand reception to Chief Minister Pinarayi Vijayan during his visit to Guruvayur temple has sparked a controversy with animal rights activists demanding action against the Guruvayur Devaswom. 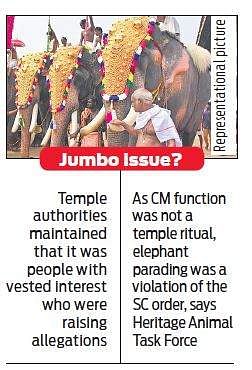 While the temple authorities maintained that it was people with vested interest who were raising allegations, Heritage Animal Task Force secretary V K Venkitachalam said he had submitted complaints to the Governor and the director of Project Elephant under the Ministry of Environment, Forest and Climate Change.

“Elephants can be paraded only in festivals registered before the District Collector concerned before October 30, 2016. The function in which the Chief Minister participated was not a temple ritual and hence the parading of elephants was a violation of the Supreme Court order in this regard. To parade an elephant in a festival, the temple authorities have to obtain permission from the district level monitoring committee, which was also not followed,” said Venkitachalam.

Activist M N Jayachandran, a member of the Thrissur district monitoring committee representing the Animal Welfare Board, said he was not informed about parading of elephants. “The Devaswom claims the elephants were paraded for a temple function, which does not need permission from the committee. But the Devaswom has submitted before the Supreme Court that the elephants will be paraded only within temple premises. How can the inauguration of a police station be termed a temple ritual?” he asked.

Jayachandran said he would file a complaint with the Principal Chief Conservator of Forest (PCCF) on Wednesday demanding action against the temple authorities. A top Forest officer admitted the parading of elephants in a public function, other than a registered festival, was in violation of the Supreme Court order.
However, Guruvayur Devaswom chairman KB Mohandas claimed that the CM had attended a temple function organised on temple premises and there was nothing wrong in parading elephants.

“The CM came to inaugurate the temple police station and it was indeed a temple function. We do not need permission from the district-level monitoring committee as the elephants were not taken outside the temple premises,” he said.

Now we are on Telegram too. Follow us for updates
TAGS
Guruvayur Devaswom Pinarayi Vijayan