He said it was only after two health inspectors tested positive for Covid-19 that the government directed them to go under quarantine.

KOCHI: A war of words erupted on Thursday after Thrikkakara MLA P T Thomas levelled serious allegations against the state government and accused it of delaying the steps to quarantine the health workers who were on duty at Cochin International Airport where several Covid-19 positive persons had landed. He said it was only after two health inspectors tested positive for Covid-19 that the government directed them to go under quarantine. Hours after the senior Congress leader’s press conference, Minister for Agriculture V S Sunil Kumar, who is in charge of the Ernakulam district to contain the Covid-19 spread, gave tit-for-tat replies to the charges. Here is the exchange of words between the two: 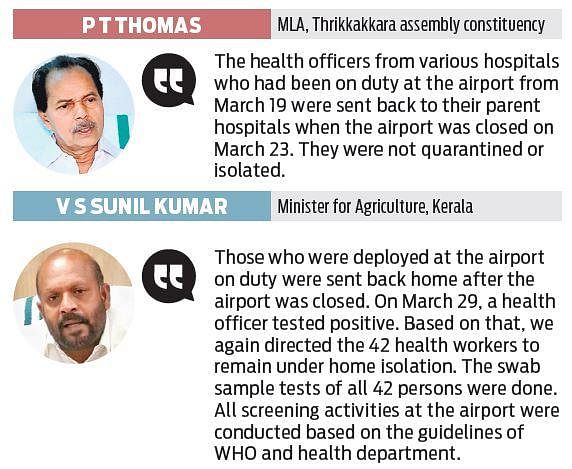 P T Thomas: Some of the doctors who were deployed at the airport conducted surgeries at the government hospitals.

P T Thomas:  The government is not yet ready to release the route maps of the two health workers.

P T Thomas: On March 28, a Covid-19 patient was sent from Thiruvananthapuram General Hospital to the Government Medical College Hospita there without proper precautions. Even the bystanders accompanied him in the same vehicle.

Sunil Kumar: Kerala has set an example for other states by taking all precautionary measures. Kerala was the first state that had conducted the screening of all air passengers including domestic passengers. If anyone needs clarifications, the health secretary, health minister, district collector and DMO are available. The people’s representatives should stay away from making such statements as these will dampen the spirit of health workers.