Destiny had its say again: MK Arjunan leaves on a quiet note

The ability to create songs that reflect the characters’ minds and adhere to the situation was considered the strength of Master.

KOCHI: Perhaps destiny had it that MK Arjunan would leave this world quietly. He had made Malayalam cinema richer with hundreds of melodious songs, but it took five decades for the state to officially recognise him. Awards or not,  thousands who adored him would have wished to offer him last respects, but his death came in the time of Covid which meant even many of the near and dear ones could not reach out to him. But then Arjunan Master, as he was fondly called, was least bothered about all the worldly pleasures. “For me, life has always been music,” he said when TNIE asked him why it took so many years for him to win a state award.

That way, music was everything for him. He has more than 500 drama songs as well as festival songs and devotional albums to his credit. He worked with all leading singers like Yesudas, Jayachandran, Susheela to new generation singer Abijith Kollam who sang Kuttanadan Kattu in Bhayanakam (2018), which fetched him the award.

Said the movie’s director Jayaraj: “I consider it as a virtue that he won his first award through my film. During my childhood days, it was Arjunan Master’s songs which I was obsessed with. When I did Naayika (2011), I wanted someone well-versed to recreate that retro mood.

“Master was my only choice. We even rerecorded ‘Kasthoori Manakkunnallo’ for the movie. The recording also saw Master and Dasettan (Yesudas) rejoining after a long gap. Jayachandran Sir sang another beautiful song ‘Nanayum Nin Mizhiyoram’ penned by Sreekumaran Thampi. Altogether, it was like a get-together of legends,” Jayaraj said.

The ability to create songs that reflect the characters’ minds and adhere to the situation was considered the strength of Master. One of the best examples is the song “Chandrakiranathin Chandanamunnum Chakora Yuva Midhunangal” from Mizhineerppovukal (1986).

Even though it is a romantic song, the composer tried to add a touch of pathos and mystery feel to the song, making it one-of-its-kind melody in Malayalam. “It was as per the demand of producers Sree Sai Productions that Arjunan Master became the music director of my debut movie,” said director Kamal.

“At the first meeting itself, Master asked us to give him the ‘poem’. He used the word ‘poem’ and made it clear that he doesn’t want the lyricist to pen as per his tune. Later, we handed over R K Damodaran’s lyrics to him. Master made three different tunes based on three different ragas. I liked the first tune the most as it had a melancholic touch to it,” Kamal said.

“Though screenwriter John Paul and even actor Mohanlal had doubts about the need to have a romantic number, I very much liked the tune. Master told me that it was in tune with the character of Mohanlal which has elements of villainy that he composed the song. That is how the song ‘Chandrakiranathin’ was born,” director Kamal remembered.

Jayaraj said Arjunan Master used to play three tunes of every song on his harmonium. “We can select one from the three. That means, if he has composed 500 songs, he might have created 1,500 tunes. We’ve heard only 500 of them, which the directors opted. Those unheard may have been even sweeter,” said Jayaraj. 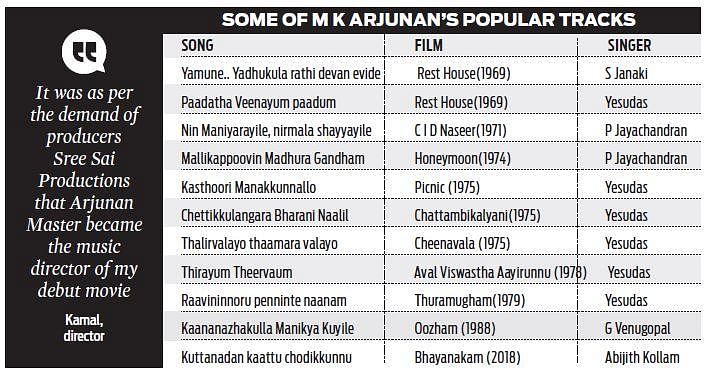 Stay up to date on all the latest Kerala news with The New Indian Express App. Download now
TAGS
MK Arjunan