THIRUVANANTHAPURAM: Once ostracised for being the first state to have Covid-19 cases in the country, now Kerala is solving the transportation issues of neighbouring states through a social media platform set up to ease the hurdles of truck movements into the state.  The social media platform was put in place by K R Jyothilal, Principal Secretary of Transport, in the light of a drastic fall in truck movement to the state after states like Karnataka blocked the movement of vehicles, including those carrying essential supplies, to and from Kerala.

The social media platform works to solve the traffic bottlenecks in Kerala, Karnataka, Tamil Nadu, Andhra Pradesh, Telangana and Maharashtra. Speaking to TNIE, Rajeev Puthalath, Joint Transport Commissioner, who is coordinating the inter-state traffic movement in the state, said the common platform has heads of various departments in the south and central Indian state.  And whenever there is an issue in the movement of traffic or essential goods, the respective state governments pass the message to the War Room of Kerala set up in the backdrop of Covid-19 control. Soon, the states concerned would take up the matter and solve the issue immediately. 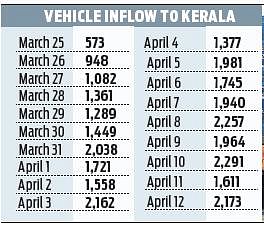 This is visible in the goods movements into the state as well. According to the statistics of the Covid War Room, if only 573 trucks had reached the state on Mach 25, a day after the national lockdown was announced, it has steadily climbed up to 2,291 at one point of time against the average of 2,300-2,500 trucks per day. Now, an average of over 2,000 trucks have been reaching the state with essential goods, he said. The check post issue with Karnataka was the main problem that Kerala had to deal with regarding the inter-state goods movement. It has almost been solved now. However, Karnataka contributes only a small per cent of total goods movement into the state.

Out of the 2,000-2,200 trucks that reach Kerala every day, more than two-third of the trucks - roughly 1,500-1,600 -- come from Tamil Nadu. Other states together contribute only 500-600 trucks, said officials.
The logistic issue of inter-state movement of essential goods has been solved and now the state is preparing to face the scenario after May 3, said Jyothilal.  It would be a daunting task as there would be an increase in inter-state traffic of stranded passenger. The War Room is now drafting guidelines for the movement of passengers and goods after the extended lockdown which would be completed in a week, he said.