As more evidence that tumbled out of the Sprinklr cupboard on Monday pushed the Left government further on the back foot, Chief Minister Pinarayi Vijayan chose to ignore the allegations.

THIRUVANANTHAPURAM: As more evidence that tumbled out of the Sprinklr cupboard on Monday pushed the Left government further on the back foot, Chief Minister Pinarayi Vijayan chose to ignore the allegations. Instead, he attacked the media for spreading false stories and referred to his earlier ‘media syndicate’ jibe once again. Reiterating that he was not worried about controversies, Pinarayi said the focus now is solely on fighting the pandemic.

It happened on a day when reports came out on Sprinklr’s tie-up with New York-based pharmaceutical giant Pfizer, which is into research on developing a COVID- 19 vaccine, a deal that was confirmed three years ago by Pfizer itself. But Pinarayi opted to toughen his stance and adopted a hostile attitude during the daily presser on Monday.

Losing his cool when faced with a volley of questions on the Sprinklr data transfer deal, he rejected them outright and challenged the mediapersons to come up with evidence to s u b s t a n t i a t e t h e allegations. Left ally CPI too has conveyed its displeasure over the deal while the CPM secretariat is set to discuss the row on Tuesday.

This is not the time to go after allegations: Pinarayi

Both  the CPM central leadership and CPI are unhappy over the allegations surrounding the Sprinklr deal, which is not in line with the Left front’s declared stance on data security. The CPM central leadership is also learnt to have asked the state unit to clarify its stance on the current controversy. Asked about reports that the CPM Politburo had rejected the state leadership’s report in this regard, Pinarayi chose to play his infamous ‘media syndicate’ card yet again. “A section of people among you are trying to create fake news. This is not the time to go after such allegations. History will prove who’s right.

Why are you worried more than me? Whoever has any evidence, let them produce it. If the IT Secretary has said something, why don’t you ask him?” he asked. “Some of you are known for making false stories. At a time when I was occupying a different chair, a couple of journalists joined together and made the ‘Save (CPM)’ story. Later on, one among them revealed it was a cooked-up one. The allegations that surface now just happen to be of a different kind. When you fabricate such stories, how do you expect me to respond?” asked Pinarayi. 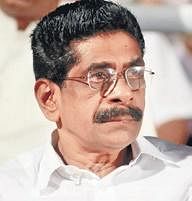 Clear people’s doubts, says Mullapally Meanwhile, KPCC president Mullapally Ramachandran accused Pinarayi of trying to duck the Sprinklr row by refusing to comment on the same. He said the CM’s latest outburst would only serve to further cement people’s doubts on his actual role in the Sprinklr row. “Addressing the media after a break, the CM shied away from commenting on the Sprinklr row. Instead, he was keen on blaming the media and wanted to gag them. The CM sought to bury the corruption charges like an ostrich who tries to save itself from its nemesis. But the people are witness to everything,” said Mullapally.