Padmanabhan was revered as the worldly embodiment of Lord Sree Krishna,he has left behind indelible memories in the minds of scores of devotees across state

THIRUVANANTHAPURAM: It is not unusual in the country for men or women to attain divine status before or after death. But an elephant attaining divine status in its prime age is very rare. When tusker Guruvayur Padmanabhan passed away in Guruvayur on Wednesday, he not only left behind indelible memories in the minds of scores of devotees and festival revellers across the state, but also a vacuum which is hard to fill as the elephant was revered as the worldly embodiment of Lord Sree Krishna.

There are a lot of elephants like Thechikottukavu Ramachandran, Mangalamkunnu Ayyappan and Mangalamkunnu Karnan which have more height and superior body features than Padmanabhan. But whenever Padmanabhan was featured in a temple procession, no other elephant could claim the ‘thidambu’ of the deity in the procession. It was an unwritten rule which nobody dared to violate.

When the festival spirit and competition between participating deshaams (hamlets) during the famed Nenmara-Vallangy Vela in Palakkad reached its frenzy, the elephant was hired for a record ekkam (rent) of Rs 2,22,227 in the history of Guruvayur Devaswom. Though other elephants which have more height were present in the festival, Padmanabhan carried the thidambu. 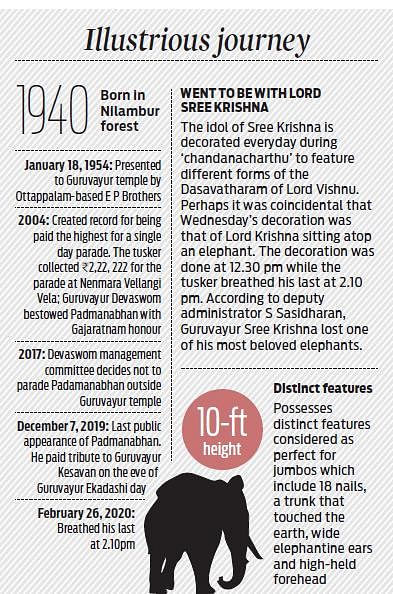 Murali V, former deputy administrator in charge of the Guruvayur Devaswom-owned elephant yard, said, “When I was in charge of the elephant yard, the Devaswom received the highest number of recommendations from ministers, MLAs and MPs for Guruvayur Padmanabhan. The devotees and festival committees used to exert pressure on legislators to have the presence of Padmanabhan in their temple, but often the Devaswom had to turn down these pleas as he was not allowed to be featured in processions in quick successions.”

Dr TCR Nambiar, a veterinary doctor who had been attached to the Devaswom for 11 years, said, “I was attending to Padmanabhan during his prime age. People, including women and children, used to prostrate before the elephant when they visited the elephant yard of the temple. I had to tranquillise the elephant only once in my career in Guruvayur Devaswom. He was very obedient and healthy and used to respond to treatment very quickly.”

Having put up his best and lived up to his formidable reputation as the cynosure of all eyes during the festivals across the state, the elephant had secured the Gajaratnam Pattam in 2004 followed by a slew of titles considering his unique features and qualities.

Treatment of the tusker
A team of doctors including Avanipparambu Maheswaran Namboothirippad, K Vivek, P Venugopal, P B Giridas, D S Rajeev and Devan Namboothiri was appointed exclusively for it’s treatment
The treatment methods were adopted after consultation with K Kunal Sharma, an expert

Now we are on Telegram too. Follow us for updates
TAGS
Guruvayur Padmanabhan Elephant