KOCHI: Family problems, illness, alcohol/ drug abuse and bankruptcy are the major factors driving more Keralites into committing suicides. Of the 8,237 people, who committed suicide in the state in 2018, 6,364 were males.

According to latest data on suicides released by National Crime Records Bureau (NCRB), family problems forced 2,458 males and 755 females in Kerala to take the extreme step while 643 males and 220 females ended their life unable to battle various illness that includes cancer, paralysis and psychological disorders.

Bankruptcy also resulted in many number of suicides in Kerala with the data showing that 229 males and 23 females committed suicide in 2018 due to financial strain.

Surprisingly, unemployment has also resulted in suicides of 130 males and 17 females in the state during the same period.

Eminent sociologist and Calicut University Sociology Department coordinator NP Hafiz Mohamad said Malayalis are still living in a dream world not willing to accept the reality that family as an institution has started to disintegrate due to various socio-economic factors.

“We still look at family and religion as the traditional system offering solace, compassion and kindness. But in reality, these two institutions have transformed completely.

The western world had learnt this truth many years back and people have adopted to different life skills to deal with family break ups, divorces and other issues,” he said adding people are seeking refuge in alcohol and drugs unable to deal with emotional breakdowns due to issues in the families.

“People are more sentimental when it comes to family and a person’s expectations from a family is high when it comes to love, care and support. When a strife disturbs a relationship, they are unable to handle the emotional stress resulting in psychological breakdown,” he said adding “we still see love as a factor for marriage. It will take some more years for Malayalis to become mature in handling divorce and separations.” 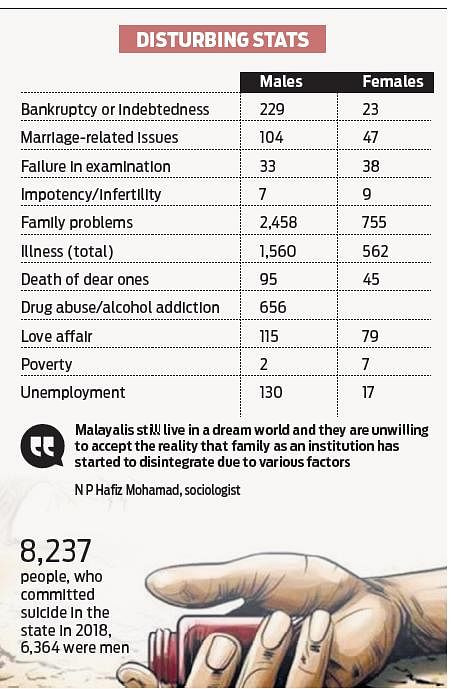 Stay up to date on all the latest Kerala news with The New Indian Express App. Download now
(Get the news that matters from New Indian Express on WhatsApp. Click this link and hit 'Click to Subscribe'. Follow the instructions after that.)
TAGS
Keralites suicide