Customs zeroing in on financiers and buyers

KOCHI: The Customs officers probing the smuggling of gold through diplomatic channel are closing in on key agents and end-buyers of the gold smuggled by accused Swapna Suresh, Sarith P S and Sandeep Nair. The arrest of K T Rameez of Malappuram, who is suspected to have collected gold smuggled in the past, has provided the officers with ample information about the network that finances and buys the gold the trio smuggled from the UAE.

“Our probe has gathered momentum. We will reach financiers and buyers soon. Rameez was one of the financiers of the racket and had received gold from Sandeep before handing it over to another agent. We have identified several people in the network and they will be nabbed soon,” he said.The Customs has also received information that the conspiracy for smuggling was hatched in an apartment in Thiruvananthapuram frequented by the trio.“They were in the apartment a few days before the consignment was seized. We have seized the CCTV camera visuals and the apartment’s logbook,” he said.

Sarith’s interrogation revealed that the gang was into gold smuggling since September 2019. “We suspect they used other smuggling methods like using carriers besides misusing diplomatic channel. The gang had smuggled gold via diplomatic route on June 24 and June 26,” said an officer.Meanwhile, the Additional Chief Judicial Magistrate (Economic Offence) Court on Monday remanded Rameez to 14-day custody. The court will consider the Customs’ plea seeking his seven-day custody on Wednesday.

“Rameez was involved in two gold smuggling cases which were detected by Directorate of Revenue Intelligence and Customs. However, a few gold consignments smuggled by Swapna and others were yet to reach him. We suspect the consignments are hidden in places only known to Swapna and Sandeep. A search is on to recover the consignments,” said an officer. 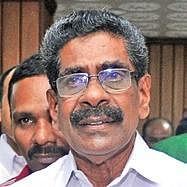 ‘Mysterious how Pinarayi is still protecting Sivasankar’
T’Puram: KPCC president Mullappally Ramachandran said it is mysterious how the chief minister was still protecting his former principal secretary and IT principal secretary M Sivasankar despite the latter having close ties with the suspects in the smuggling case. In a statement, Mullappally said despite more revelations against the tainted bureaucrat, the CM has been maintaining that it is all eyewash.

He said the CM is scared of Sivasankar, lest his secrets be revealed. He alleged that when several applicants have eagerly been awaiting placements under PSC, the IT secretary resorted to nepotism and appointed scores of applicants through consultancy agencies. Mullappally said a statewide protest will be held at all 14 collectorates demanding a CBI probe, so as to bring the CMO under scrutiny. The KPCC leadership has also been demanding for a RAW probe as the case has international links.

CB denies Sarith’s presence at Balabhaskar’s accident site
T’Puram: The Crime Branch team that investigated the death of violinist Balabhaskar in a road mishap will probe the claim of mimicry artist Kalabhavan Soby that smuggling accused Sarith P S had been present at the scene of the accident. Soby claimed Sarith was one of the persons whom he recalls having seen at the accident spot on the capital city’s outskirts. A Crime Branch source said though the claim made by Soby appears far-fetched, the matter will be probed since every angle should be looked into to get at the truth.  “We had conducted the probe in a highly professional manner and collected scientific evidence which conclusively  proved Balabhaskar’s death was an accident.

That’s why we find it tough to buy his version. Still, we will check whether his comments have any merit,” said a Crime Branch officer. He said the claims made by Soby regarding the accident were found to be incorrect.  Soby had several cases against him and this was brought to the attention of the High Court by the Oonnukal police following a petition moved by the mimicry artist seeking police protection. The  government had handed over the Balabhaskar case probe to the CBI.