The psychological cost of pandemic

One-year-old Sara is unable to sleep without her mother beside her.

THIRUVANANTHAPURAM: Along with Covid’s human cost, its terrible psychological toll is a clear pointer to the havoc wreaked by it. Express gets up close with Malayali expats who have been hit by widespread displacement and economic ruin

One-year-old Sara is unable to sleep without her mother beside her. But Pinky Alex, a front-line health worker in Abu Dhabi, had to return to work, leaving the infant behind since the rest of the family did not get ICA approval to return to the UAE. Sara and her three-year old brother Nathan along with their father Sony Jacob Ambanad are hence stuck in Kerala. The family had flown down in happier times for just a month-long vacation in February and was scheduled to return on March 19. “It’s so difficult to manage both, one just an infant and the other, a toddler, when their mom is not around.

We have no other source of income and have been on loss of pay since February. Yet we continue to pay our rent, phone, water and electricity bills from here. We are trying desperately to return, but only Pinky could get ICA (Federal Authority for Identity and Citizenship) approval and flew back on a chartered flight. We don’t know for how long we’ll have to wait,” says a desperate Sony, who works with an Abu Dhabi hospital.

Theirs is not an isolated case. Post-Covid restrictions, Malayali expats are the most affected, with all the rigid travel curbs. Though repatriation flights have started to take them back to the UAE, there seems to be no end to their woes. With the mandatory ICA approval hard to get, scores of expats are finding the going tough. While authorities say families will get preference, in reality, they are the worst hit.
With thousands of kids separated from their parents for a long period, an active social media campaign -- #takemetoMoM -- has been gathering momentum on social media. About 200 mothers from across the country are part of the group. A one-and-a-half year-old forced to remain separated from her family members was finally reunited with the kin on Saturday. 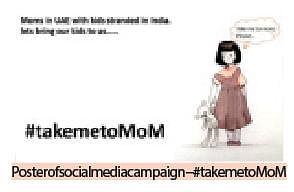 In the case of three-year old Anindita, it was the other way around. Daughter of Sharjah-based accountant Anju Balakrishnan and Praveen, a clerk in Ajman, it was only Anindita who got ICA approval on June 25. The Thrissur-based family is  stuck here as their applications have been rejected every single time till date.  “According to the authorities, families are being given preference for approval. But our request has been getting rejected over and over again. We have an H1 visa. On July 12, our request got rejected without any reason being given, while our daughter’s request has been approved. How do they expect a three-year-old to fly alone? And as of now,  flights are on, only till July 26,” said an exasperated Anju.

Prolonged separation from family and financial issues have led to innumerable number of them lapsing into deep depression.  What makes this even more scary is the fact that even small kids, who are forced to sit idle in their flats for too long, are falling prey to the same. “My youngest child, who’s five-years-old, suddenly wakes up with a start around midnight, calling out for his father. My eldest, who  is 14, is so evidently depressed. She now sits alone in pitch darkness. I too am waiting with my three kids here, for my husband to just return,”  Thasneem Yoosuf, who lives in Musaffah, told Express over WhatsApp.

Back here, her husband Yoosuf T K, who runs a workshop in Musaffah, sounds even more worried. “When I had secured the approval to go back, there were no flights. Now when flights have started, my application was rejected. This has happened four times, back-to-back. I have been knocking at all doors but to no avail. Once the flights stop by July 27, what are we supposed to do?” he asks. Thasneem says the family has been going through a terrible ordeal.

“The staff have not been paid their salaries, the company’s licence has expired and the bank account is now  frozen.  We haven’t paid our house rent so far. I don’t seem to be able to stop myself from sinking into severe depression. I seem to be also experiencing memory loss. My three months’ salary too has not been paid,” she laments.

Covid restrictions have been playing out a painful saga for thousands of Malayali expatriates.. A bleak future is what seems to stare back at them, with a precarious financial position compounding their woes. Covid testing and confusion about quarantine in the UAE pose another issue. Securing a Covid negative certificate is another tricky one which haunts expatriates. To return to the UAE, a Covid-negative certificate having a validity of 96 hours is mandatory. As per the state government circular, test results should be provided within 24 hours. But that seldom happens.

Private laboratories say they cannot deliver test results within 48 hours. “We even approached the Rajiv Gandhi institute and Sree Chitra. But they don’t take swabs directly from us,” says Bobisha Manoov who works in Dubai.  The list of grievances seems endless. Official apathy further confounds the matter. Unless there’s  urgent intervention, this is not going to end anytime soon.

Now we are on Telegram too. Follow us for updates
TAGS
psychological issues psychological problems Pandemic COVID 19 lockdown