Cases skyrocket from 105 to 15,032 in 120 days after lockdown was declared, but IMA state president says state is not faring badly in terms of numbers and mortality

However, after the lockdown was lifted and the number of cases in states like Maharashtra, Delhi, Karnataka, and Tamil Nadu increased, it took 118 days since the first case was reported on January 30 for the state’s total cases to touch 1,000 marks (on May 27).

In between, the state had brought down the number of new patients to zero on three consecutive days in the first week of May. This success invited praise from far and near, with Kerala Model being adopted by some of the affected states. However, from the 1,003 cases on May 27 to 15,032 cases on July 22, the state has seen a spike of 14,029 cases in 56 days.“But that numbers are still far behind the ones being reported in the other states. Also, if the number of deaths is taken into consideration, we are recording still in two digits while the others have gone beyond hundreds,” said Dr. Abraham Varghese, state president, Indian Medical Association. “We actually saw a spike only when the travel ban was lifted and people began coming in from other Covid-affected states and countries, he added.

The state has till date recorded 45 deaths and its mortality rate is 0.30, comparatively lower than in the states that fall in the same bracket. However, the number of local transmission cases which is increasing alarmingly is posing a serious challenge to the government and also the tired frontline warriors who have been stretched to their limits. It is also not helping to see that the number of hotspots is also increasing -- three short of 400 now.

According to medical experts, the increase in the local transmission cases is due to the socially irresponsible behaviour of the general public. “This is not expected of the people of a state which has the highest literacy rate,” said Dr Abraham. Meanwhile, leader of the Opposition Ramesh Chennithala said, “With Kerala seeing a seven per cent increase in the number of daily cases, the state is now placed second in India in terms of percentage growth rate of Covid cases.” He also alleged gross mismanagement on the part of the government for the increase in the cases.

However, Agriculture Minister V S Sunil Kumar, who is in charge of Covid control measures in Ernakulam, lampooned the allegations. “There has been no such thing as mismanagement. We have no precedents to follow when it comes to formulating strategies against Covid. The government is forging ahead learning on the way. The positive thing that should be noted is that if such a pandemic, God forbid, happens any time in the future, those in power at that time will have something to guide them. They can improve upon our shortcomings,” he said.

Referring to a BBC report, he said, “We are not celebrating anything. So the case of premature celebrations doesn’t arise. The global media reports have never accused us of any wrongdoing. They were just stating facts. The whole thing is being twisted out of proportion by the political rivals for the sake of gaining mileage.” 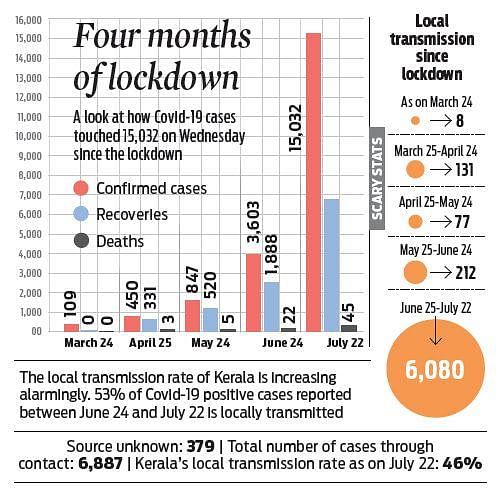 Now we are on Telegram too. Follow us for updates
TAGS
Kerala coronavirus community transmission Kerala model