Covid-19 protocol and guidelines were rolled out even before the first case was reported in state, says Pinarayi

THIRUVANANTHAPURAM: It was the government’s ‘disciplined’ Covid prevention efforts over the last six months that prevented the state from landing in a dangerous situation which many had predicted, Chief Minister Pinarayi Vijayan said on Thursday.

He said the state rolled out a Covid protocol and guidelines even before the first case was confirmed on January 30. He said three Covid cases that emerged in the first phase were quickly contained. The second phase began on March 8 after a few people arrived from abroad. However, only 165 cases of local transmission were reported during this phase, Pinarayi said.

The third phase of Covid-19 in the state, that began with the unlock process, saw people arriving through state borders, airports and seaports in large numbers. “We had expected a huge surge in cases. However, the rate of spread has not crossed our estimation and Kerala is faring well when compared to other states,” Pinarayi said.

The chief minister cited numerous interventions the government made in its fight against Covid. Appointment of 276 doctors on a single day, creation of 273 posts in Kasaragod Medical College, recruitment of 980 doctors on temporary basis and appointing 6,700 temporary health staff through NHM were some of them, he said.

Deploying over a 1,000 ambulances and 50 mobile medical units, conversion of hospitals to special Covid hospitals and setting up a monitoring mechanism from the ward-level to the top were among the steps taken by the government as part of Covid prevention, he said. 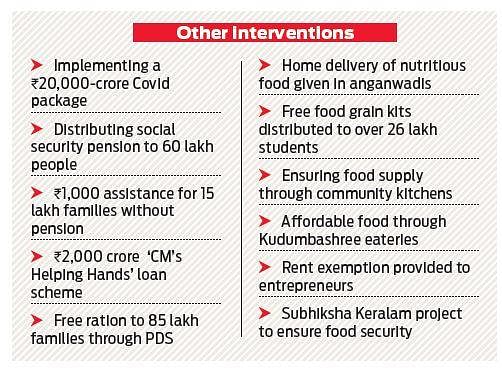 Now we are on Telegram too. Follow us for updates
TAGS
Pinarayi Vijayan COVID 19 Kerala