The events were conducted across eight different stages named after people and events that were in the news recently.

IDUKKI: Sacred Heart College, Thevara, lifted the overall championship trophy for the third consecutive time at the Mahatma Gandhi University Arts Festival that concluded here on Monday. The college scored 153 points to bag the title. Maharaja’s College, Ernakulam which was initially neck and neck with table toppers ceded their advantage when the results of all the 60 items were announced on Monday morning. The team had to settle for the second position with 97 points. 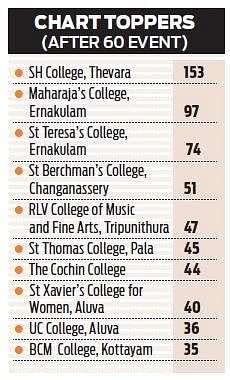 Amalu Sreerang, an MA Animation student of St Joseph College of Communication, Changannassery, was adjudged the Kalathilakam. She won the first prize in Kerala nadanam, bharathanatyam and folk dance category with the maximum number of points for individual events. While K S Ramdas, an MA history second year student at St Thomas College, Pala, was adjudged the ‘Kalaprathibha’.

Ramdas had participated in five events at the fest, of which he bagged the first prize in kathakali and bharatanatyam, second in Kerala Nadanam and other classical dance categories and third in folk dance.  Amalu, daughter of Anil P Sreerang and Biji, has been learning classical dance since she was three. And by the time she came to class eight, Amalu was already a stage performer. She had also secured A grade in several state school events.

The events were conducted across eight different stages named after people and events that were in the news recently. The venues were called Dr B R Ambedkar Nagar, Dakshayani Velayudhan Nagar, Fakrudheen Ali Nagar, JNU Nagar, Gauri Lankesh Nagar, Fathima Latheef Nagar and Simon Britto Nagar. As many as 13,000 students from 200 colleges from Idukki, Kottayam, Alappuzha, Pathanamthitta and Kochi districts took part in the event. Though the fest witnessed a good turnout, inordinate delays at some venues did give contestants and their parents stressful moments.