In Ernakulam, a total of 131 persons including air passengers who came into contact with the three-member family have been identified.

THIRUVANANTHAPURAM: Fear had gripped the state after eight people were found infected on Tuesday alone, but it gave way to a sense of relief as no new cases were reported on Wednesday. The condition of the two elderly people at the Kottayam Government Medical College too is said to be stable. 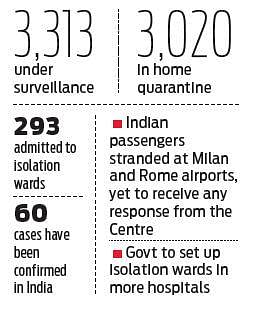 Yet, the Health Department continued to be on its toes, with the Bureau of Immigration helping it track foreigners and those who arrived from the affected countries. The total confirmed cases in the state is 17.
“No positive cases were reported on Wednesday. The prevention and control activities, as well as contact-tracing process, are on the right track,” Health Minister KK Shailaja told mediapersons.

Shailaja said four other channels have also been identified to receive data. A total of 162 persons in Pathanamthitta, Kottayam and Ernakulam districts have been identified as ‘high-risk’ after they got exposed to positive cases.

In Pathanamthitta, the department identified 969 people who came into contact with the infected. Of that, 129 are in high-risk category, with 13 per cent of them belonging to above-60 age group. Their swab samples have been sent for testing. As many as 60 people were identified in Kottayam. Of them, 24 are primary contacts and 36 secondary.

In Ernakulam, a total of 131 persons including air passengers who came into contact with the three-member family have been identified. Thirty three of them belong to the high-risk group.

Now we are on Telegram too. Follow us for updates
TAGS
Coronavirus