Lives Vs Livelihood: Battle for survival

The lockdown now set to enter its third phase is posing the biggest challenge to business enterprises yet in recent memory. And it has spawned a lives versus livelihood scenario

KOCHI: There is no point in keeping the shop open. There is hardly any business. Most of the workers in this area are from up the country’s north such as UP and West Bengal and they are preparing to return home,” said Anoop C M, owner of a small furniture shop in Nellikuzhy panchayat in Kothamangalam here. Covid-19 cases have not been reported in rural Kerala, at least not until now. But, the lockdown which was lifted for small shops last week has had little impact in panchayats such as Nellikuzhy. 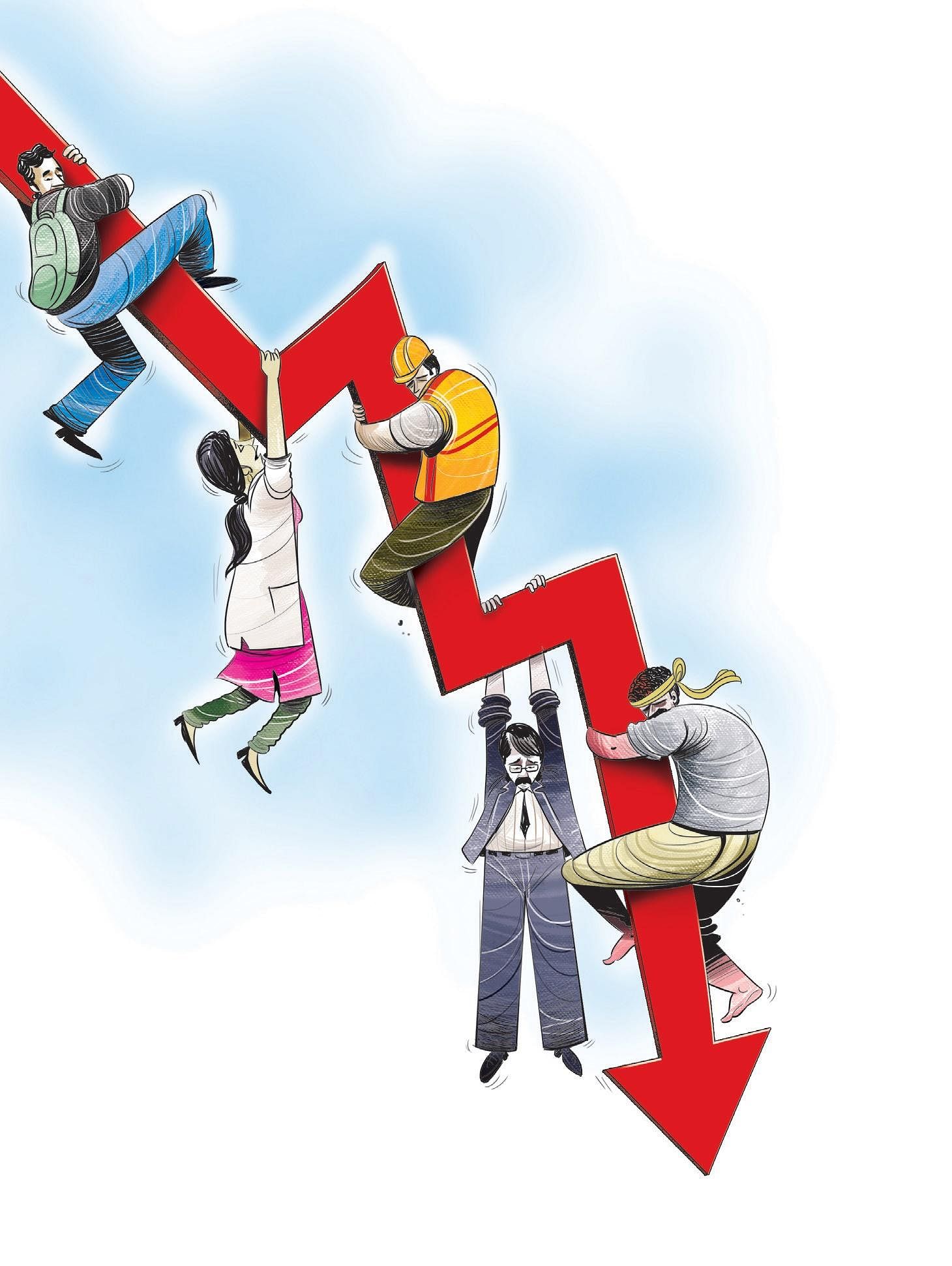 The region, which got the tag of ‘Kerala’s furniture capital’ some two decades ago after hundreds of small, medium and big furniture shops mushroomed there, employs over 15,000-20,000 migrants. “In these times, it’s nonessential purchases like chairs, almirahs, dining tables etc that take the back seat,” said Anoop. The situation is the same in the state’s semi-urban and urban areas. Shameer, who reopened his small fancy store in Kalamassery on April 27, said business has plummeted to `1,000-2,000 daily from the earlier `7,000. “What will I do sitting at home, so I open the store,” he said. Sans migrant  workers, Kerala may struggle to get back on its feet.

During a recent webinar, a businessman is learnt to have told the industry and labour secretaries it should be ensured that the migrants do not go home when the economy is opened to business again. “When the trains are made available, it won’t be possible to stop them. We expect business to decline by 50-60 per cent in the next three months,” said Sunny L Malayil, president, Indian Chamber of Commerce & Industry (ICCI). “We will see job losses across sectors.

In the hospitality sector, we are seeing a lot of people being asked to leave,” he said. ICCI has, in a memorandum, requested several bailout steps including asking banks to defer all loans till September 30, allowing MSMEs to repay the six instalments with interest at six per cent over a 12-month period and exempting industry from paying ESI, PF and bonus on the salaries during the lockdown. Binny Emmatty of Kerala Samsthana Vyapari Vyavasayi Samithi, blamed the state government for failing to keep its promise to the trading community. “During the 2018 flood, the government promised a relief package for the trading community.

Till now, we haven’t got a single penny,” he said. “Now, we urge the government to release at least Rs20crore for the loss of business suffered due to the lockdown,” he said. And 91 various industry bodies in Kerala under the Confederation of Industrial & Trade Organisations (CITO)submitted a list of emergency steps. These include easing government stipulation that full salary must be paid to all employees who have stayed at home without work.

“There are several instances when we sent vehicles to pick up the employees but they declined to come,” said an office-bearer. So what lies in store after the lockdown is partially lifted from Monday. While two districts — Kannur and Kottayam — are in the red zone, the businesses in 9 districts marked orange and three green (Ernakulam Thrissur and Alappuzha) can resume partially. “The initial fear of people is over. I think we can slowly get back to normal business after three months.

By that time, we will also have to ensure that the migrant workers, who have left for their home states return ,” said Malayil of ICCI. But before that happens, Kerala must also hope and pray that the virus is contained in northern India from where the migrants will return by September- October. In the meantime, Kerala will also have to brave the challenge posed by homebound expats.

SENTINEL OF A DYING VOCATION

For the past 30 years, his fingers have been working deftly with glass and wood, creating beautiful frames for hundreds of photographs. But ever since the lockdown began, 54-year-old Manoharan Pillai V K has been sitting idle. On May Day, Pillai decided to open his modest establishment ‘Manu Photo Frames’ located near Kavanad junction in Kollam. He sat all day long awaiting a customer. But no one turned up. “I know this is a dying vocation.

People now prefer to get photos laminated from studios,” said Pillai. Except for photos of deities handed over for framing once in a while, there is not much work, he added. Pillai also helps fixing windowpanes of small mechanised fishing boats. He sources materials such as glass and wood from a wholesale shop in Kollam town. Though he is eager to resume work, the wholesale shop remains shut. “I know that getting a photo framed would be the last thing in the mind of a person in such a scenario. These hard times will surely pass. Besides, I have no other choice as this is the only work I know,” he says. — Sovi Vidyadharan

Abdul Rasheed’s eyes lit up when he saw a young woman entering his ladies store ‘Fida’ at Karukappilly in Kochi. “Now, she is my third customer in these five days,” he said as he began bustling around picking out items from the shelves to show her. “Times are tough. With the shop remaining closed for all these times and people still finding it safe to sit at home, the sales might not pick up anytime soon,” he said. Also, the fact that people are cautiously spending money is not doing any good for people like me, he added.

Sixty-five-year-old Abdul has been doing business for the past 20 years. “I opened the store six years ago. Business was good and I was able to bring home a tidy sum after paying all the extra expenses like rent, tax etc. But now, with no business happening, I have no idea as to how I am going to pay the rent, which I am behind by three months,” he said. According to him, it would be safer to shut shop. “But it is my livelihood,” said Abdul as tears welled up in his rheumy-eyes while refusing to pose for photos since he is not supposed to be out as per rules. — Anu Kuruvilla

Unable to ‘cobble’ life together

For Sasi K, 52, who has been selling mending footwear at his tiny shop at Statue near the state Secretariat in Thiruvanananthapuram for the last 30 years, lockdown put a lock on his livelihood. “On the eve of the shutdown, I had left the shop with the small amount I earned that day. It’s been over 40 days since I opened the shop,” said Sasi, who is his family’s breadwinner. Though he used to make around `400 to `500 on a good day, the future looks bleak.

A father of two, Sasi said,” I will be needing a lot of money when the school reopens. If this lockdown continues I might have to borrow money to send my children studying in Class VI and Class IX back to school,” he said. According to Sasi, “I live at Kudappanakunnu which is 12 km away from my shop. I will get customers only when public transport resumes. I hope things will get back to normal very soon”. — Shainu Mohan

Watches and clocks have started ticking again at Sun Shine Time Centre at Murinjapalam Junction near Thiruvananthapuram Medical College. Having opened his modest shop of 60 square feet after more than a month, owner Narayanan R knows that times have changed as even regulars become hard to spot. “It may be due to the restrictions,” reasoned Narayanan, dusting his shop. Apart from customers, the lockdown has also usurped spare parts.

“There is a shortage of straps, needles and batteries as these items come from Mumbai and China,” he said. The only business he gets these days is the sale of batteries for items like car remote, blood sugar monitoring devices and ear phones. Narayanan started the shop eight years back, becoming the locality’s favourite watch repairer. A good rapport with the building owner helped him buy more time to pay the rent of `5,000. “I know I owe him money. But these times shall pass,” he said. Having managed to help his son and daughter become engineers with his modest income, Narayanan lives with his wife and two children at Pattom. — Unnikrishnan S

The Krishna Flower Merchant shop at Azhakulam Junction near Kovalam used to do brisk business. But now Krishnankutty V, 51, who runs it, has to wait for customers after opening the shop at 4pm. In his 30 years of being in the business, he has never endured such a trying period. On an average, he made around Rs3,000-4,000 daily before the slump.

“I used to supply flowers to several temples nearby. Besides, there were regular customers and marriage orders,” he said, while expressing disappointment at the government’s failure to bail out flower merchants. “Everyday I watch the CM’s briefing hoping that there will be something in it for flower merchants. But it never materialises. Thousands of families are in crisis since the lockdown,” he said. — Gautham S

Though the lockdown relaxations have given considerable relief to many, there is little cheer for flower merchants since religious functions and public gatherings which are their mainstay remain a strict no-no. Prabeesh Flower Stall at West Hill in Kozhikode stands testimony to the grim scenario. “We used to sell around 20,000-30,000 kg of flowers every month. The main revenue season — marriages, Vishu and other festivals — is gone. At least, there is hope that the stalls will be allowed to open,” said Prameesh N P, owner of the stall. — Lesly Joseph

The lockdown and the corona pandemic has cost M K Mithran dear. The months of April and May, which is when the back-toschool season begins, was when the sales happened the most, said Mithran who own Manya Footwears at Karukappilly in Kochi. “But now, every footfall appears god sent,” he said as he goes about dusting the shoes, sandals, belts and other items on display. Mithran sits looking forlorn in the shop. “It has been five days since I reopened the shop. But all I got were five or six customers who came to buy rubber slippers,” he said. “But with uncertainty looming large over school reopening dates, I don’t know when the sale will pick up,” he said. — Anu Kuruvilla