The state government on Monday issued a fresh order prescribing guidelines to be followed during the third phase of the lockdown that began on Monday.

THIRUVANANTHAPURAM: The state government on Monday issued a fresh order prescribing guidelines to be followed during the third phase of the lockdown that began on Monday. Even though the Centre had prescribed major relaxations such as resumption of public transport, and opening of liquor and barber shops, the state has decided not to ease such curbs even in green zones. Restrictions in place in non-hotspot areas in orange zones will continue in green zones too. 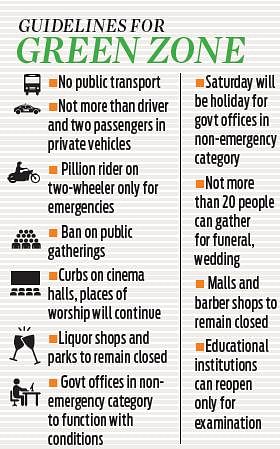 Other curbs that continue in green zones are: No public transport, not more than 20 people for wedding and funeral, among others. “If we retain the current trend, the state won’t have much trouble. But if a second wave comes and cases rise, it’ll be dangerous. It’s based on this assessment that strict curbs have been retained,” Law Minister A K Balan told reporters.

Shops in green zones will follow the same time prescribed for orange zone — 7am to 7.30pm. The total lockdown on Sundays will be applicable in green zones. Even after the state brought out the new guidelines, confusion prevailed on whether multi-storey shops can be reopened. The state’s decision to revise the Centre’s guidelines and the delay in bringing it out added to the confusion. Some shops in Ernakulam, a green zone, were forcibly closed by police leading to protests, prompting the government to come out with the new guidelines.

Relaxations
After the Covid-19 review meet on Monday, Chief Minster Pinarayi Vijayan said vehicle showrooms and workshops will be allowed to function in state except in hotspots. Owners of shops that have been allowed to function need not obtain special permission from the local body concerned. Hotels and restaurants can function in the afternoon on Sundays. The CM said no roads, except those in containment zones, will be closed. However, public transport has been banned across the state.