CPM couple in Kasaragod puts many on COVID radar

They had picked a relative who arrived at Thalappady from Mumbai and dropped him home in their car. That was just the first lapse on the couple’s part.

KASARAGOD: A 50-year-old CPM leader and his 35-year-old wife, a member of Paivalike grama panchayat, dropped the Covid guard and put Kasaragod district in a precarious position in its fight against the pandemic. They had picked a relative who arrived at Thalappady from Mumbai and dropped him home in their car. That was just the first lapse on the couple’s part.

Thursday’s results are complex and worrying for Kasaragod. Two health workers -- a radiologist and a nurse -- have tested positive. Two natives of Kumbla, aged 58 and 31, who arrived from Maharashtra also contracted the disease. The 58-year-old man suffers from acute diabetes and cardiac ailment, said district surveillance officer Dr A T Manoj. He has been shifted to Kannur Medical College in Pariyaram.

Another patient who tested positive is a 26-year-old man from Kallar. He had come from Bengaluru and got admitted to the Poodangal community health centre with complaints of chest pain. Another person who tested positive is a 65-year-old man, who had hitch-hiked in an ambulance to Kasaragod from Manjeri. The ambulance was returning after dropping Malayalis from Maharashtra in Kottayam. He was tested after he got himself admitted to Kasaragod General Hospital with respiratory ailments.

According to health officials, the CPM couple acted irresponsibly and their actions could help spread the virus. On May 4, the couple’s 51-year-old relative, who runs a roadside eatery in Mumbai, arrived at Thalappady hitch-hiking a truck. The couple picked him up from the border in their car and dropped him at his house in Paivalike.

‘CPM leader had attended a wedding and funeral’ 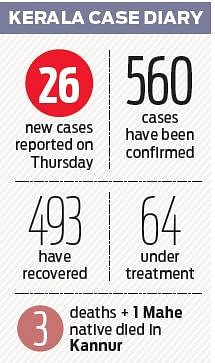 On May 9, he developed symptoms and on May 11, he tested positive for Covid. The same day, three others who arrived from Mumbai also tested positive, but they were in institutional quarantine since they arrived. After dropping the Mumbai man home, the CPM leader took a cancer patient to the District Hospital in Kanhangad on May 5. On May 7, he returned to the hospital, took the lab report, and showed it to a staff nurse.

On May 8, he visited the hospital to meet an ENT specialist because he had trouble with his voice, and then bought medicine from the pharmacy. A radiologist at the hospital tested positive for Covid-19 on Thursday. The ENT specialist, the staff nurse and an oncologist have been quarantined. Six staff of the radiology department have also gone into quarantine. A nurse in the General Hospital in Kasaragod too has tested positive.

A health official in Paivalike said the CPM leader had attended a wedding, a funeral and a cradle ceremony after coming in contact with the first patient. “The spike in the number of patients and those in quarantine shows we cannot let our guard down,” said DMO Dr A V Ramdas. Collector D Sajith Babu too asked people to be vigilant as the influx of people from other states and countries would continue.

Now we are on Telegram too. Follow us for updates
TAGS
Kasargod COVID 19 Coronavirus