Meanwhile, according to the railway official, two Shramik special trains have started from New Delhi and Jalandhar to the state.

KOCHI: A Shramik special train left for Jammu from Thiruvananthapuram Central at 7pm on Wednesday. The train carrying 1,300 passengers had three stops in Kerala including Kanhangad. According to an official of Railways, 540 passengers boarded from Ernakulam.“The train left Ernakulam South railway station at 11pm and carried passengers from Idukki, Alappuzha, Palakkad, Kottayam, Kollam and Thrissur,” said the official. All the passengers were tested for Covid by the team from the health department and were allowed to board only after they were given the all-clear. 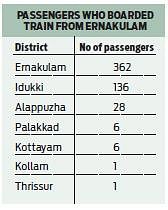 Meanwhile, according to the railway official, two Shramik special trains have started from New Delhi and Jalandhar to the state. “The one from Delhi is expected to arrive on May 22 while the schedule of the Jalandhar train is yet to be specified,” said the official. He said, more Shramik special trains will run from Thursday. “In the case of the train from Bengaluru, the technicalities are being smoothened out by the Railways and the services will begin soon,” said the official.

More from Kerala
Now we are on Telegram too. Follow us for updates
TAGS
Shramik special train Kerala