PALAKKAD: With many areas, including markets, being declared as containment zones and a number of shops closed, vegetable prices have skyrocketed in the state, overtaking the rates that prevailed during Onam.One kilogram of ladies’ finger costs Rs 80 here, tomatoes Rs 46, chillies Rs 90, broad beans (avara) and bitter gourd Rs 60 each, brinjals Rs 40, potatoes Rs 50 and white and green long beans Rs 60 and Rs 100, respectively.“The vegetable prices have gone up by 25 to 30 per cent over the past one month.There is shortage of vegetables as production has taken a dip due to lockdown. 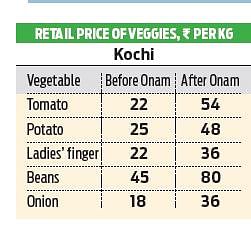 Most traders reluctant to bring vegetables from other states

Another reason for the rising prices is that traders are apprehensive about bringing huge quantities of vegetables from neighbouring states, fearing that they may not be allowed to unload the perishable goods in the markets. “Most traders are in two minds about bringing vegetables from other states. Melamuri market, the largest in Palakkad district, was closed for three days after Covid cases were reported there,” said Sunil of P G Vegetables, a wholesale dealer.

Santosh, who cultivates vegetables on 30 acres of leased land at Malampuzha, said:
“Though a lot of vegetables are grown in the state, there is a shortage which has led to the price rise,” he said.Faisal, who transports vegetables from Pollachi in Tamil Nadu to Kerala, said many shops in containment zones have been closed and wholesale markets are facing the threat of closure by health and police officials.“In such uncertain times, one can’t bring loads of vegetables to Palakkad and run the risk of being prevented from unloading it. Therefore, the arrival of vegetables from neighbouring states has come down considerably,” he said.

More from Kerala.
Now we are on Telegram too. Follow us for updates
TAGS
vegetable prices