Kerala   has made its decision on who will rule the state for the next five years but you will know the answer only on May 2.

Kerala has made its decision on who will rule the state for the next five years but you will know the answer only on May 2. Braving an unrelenting Covid-19 pandemic and summer heat, voters lined up at polling booths across the state on Tuesday to exercise their franchise in the assembly elections. The average voter turnout stood at a creditable 74.02 per cent, though it was a tad lower in comparison to the 77.35 per cent recorded in the 2016 election.

While the ruling Left Front expressed confidence of retaining power with a comfortable majority, the opposition UDF camp is also elated.

Going by the UDF assessment after the polls, the front should win anywhere between 75 to 85 seats. The BJP-led NDA hopes to make its presence felt with authoritative victories in five to seven seats in addition to finishing second in about 10 seats.

Significantly, the Sabarimala issue dominated the political discourse on the polling day, with the LDF, UDF and BJP trading charges. Chief Minister Pinarayi Vijayan claimed Lord Ayyappa and all other gods would stand with the Left Front for being there for the people, to which Congress veteran A K Antony retorted the Chief Minister should first apologise to the Lord for the Sabarimala fiasco.

The state also witnessed incidents of violence in some pockets, including at Kazhakoottam in Thiruvananthapuram where CPM and BJP workers clashed with each other. 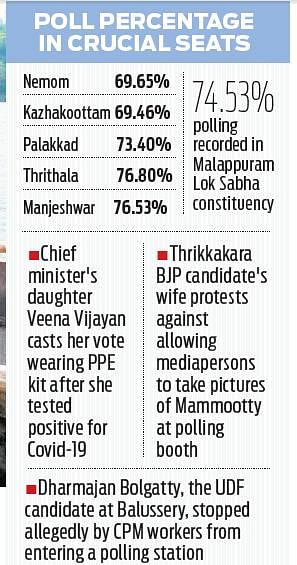 The BJP candidate in the constituency, Sobha Surendran, staged a sit-in while LDF candidate and Devaswom Minister Kadakampally Surendran flayed the cops. Violence was also reported in Haripad where CPM and Congress workers clashed. In Kannur, an IUML worker was hacked.

In many closely-fought constituencies, the voting percentage remained relatively low with BJP's lone sitting seat — Nemom — recording 69.80 per cent compared to 74.11 per cent in 2016.After the voting ended, opposition leader Ramesh Chennithala exuded confidence that the UDF will come back to power with an emphatic victory.

‘Left sure of winning at least 85 seats’

“The general sentiment among voters across the state indicates that the masses have exercised their franchise against the Left government. The publicity campaigns have not come to the support of the Left,” said Chennithala. He alleged that the Left cadre, sensing defeat, had unleashed violence against UDF workers across the state.

However, the Left leadership rejected the opposition claims and expressed confidence of winning 85 seats or more. “The Left is sure of winning at least 85 seats. The extent of victory would be known only after careful analysis of the Left wave that swept the state,” said CPM politburo member S Ramachandran Pillai.

The CPM also suspects cross-voting between the UDF and the BJP in a few constituencies. The BJP camp, though, is yet to make an assessment. While most pollsters feel it would be a close call, one thing is clear -- the bipolar political nature of the state is all set to transform into a tripolar one with the BJP-led NDA making inroads into many pockets.