NCP state president T P Peethambaran said on Sunday that the state unit will abide by whatever the central party leadership decides, giving a hint that the split is imminent.

THIRUVANANTHAPURAM: While MLA Mani C Kappan of NCP is firm in his stand that he will not remain in LDF if the Pala assembly seat is given to Jose K Mani, Transport Minister A K Saseendran will stay put in the ruling front.

NCP state president T P Peethambaran said on Sunday that the state unit will abide by whatever the central party leadership decides, giving a hint that the split is imminent. 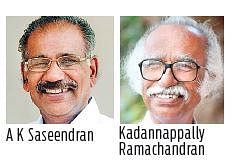 At the same time, Saseendran is learnt to have initiated efforts to merge with Congress (S) and is contemplating to recontest from his sitting seat of Elathur in Kozhikode district, but he denied the move vehemently.

The 76-year-old Congress (S) leader is unlikely to contest in the coming assembly elections and this has also encouraged Saseendran to make the move.

Saseendran is apprehensive that NCP’s candidates in its sitting seats will lose if it severs ties with LDF. Also, the minister feels that joining the UDF will only benefit Mani C Kappan. If Saseendran decides to remain in the Left camp, the NCP will see a split.

Talking to reporters in Kozhikode on Sunday, Saseendran said the reports of NCP merging with Congress (S) are totally baseless.

“Our party is already a part of LDF, so there is no need for us to think of joining a political entity. In fact, LDF’s relevance is growing day by day. These baseless reports will only mislead the NCP workers. Kappan has just expressed his concerns. NCP will contest all seats we had contested in the last assembly polls,” said Saseendran.

When NCP state president Peethambaran arrived for the party district meet in Alappuzha on Sunday, he realised that the leaders are divided on joining UDF.

Former transport minister Thomas Chandy’s brother Thomas K Thomas and his loyalists are keen to stay put in LDF, but another group of leaders from Alappuzha want to part ways and join UDF.

The main agenda of the district meetings convened by NCP is to take stock of the local leaders’ views.

THIRUVANANTHAPURAM: The AICC delegation is in the capital city for the next two days to hold second round of talks with the KPCC office-bearers and chiefs of feeder organisations following the poll setback.

It is keen to ensure that a collective leadership is the need of the hour to steer the party in the imminent assembly elections.

When it is almost certain that the current crop of DCC presidents of Thiruvananthapuram, Kollam, Pathanamthitta, Alappuzha and Kasaragod will be removed, efforts are on by some of them to desist from the move citing factional politics.

DCC presidents who are holding dual posts in Ernakulam, Palakkad and Wayanad will also be replaced by a new set of leaders before January 15.