When UDF leaders resorted to sloganeering, Khan urged them to let him perform his Constitutional duty. 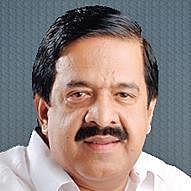 However, the Opposition members walked out after Khan resumed his address. “The speaker is facing allegations of dollar and gold smuggling, which is a first in the state’s history. He is presiding over a session where a corrupt government’s policy is being read out by the governor. The government and the speaker have made democracy meaningless,” Opposition leader Ramesh Chennithala told mediapersons outside the assembly. The UDF members then staged a sit-in at the entrance.

“The speaker and the CM are an ideal match. On one hand is a corrupt government and on the other is a speaker who has made the assembly a centre of corruption. The policy address aims to cheat people. Hollow promises are this government’s hallmark,” he said. Chennithala said Sreeramakrishnan was sabotaging the probe into the gold smuggling case.

He also wondered how the speaker’s personal staffer enjoyed the same immunity as MLAs. The speaker’s assistant private secretary appeared before the Customs after all attempts to escape the grilling failed, he said. Training his guns on Khan, Chennithala said, “The governor said he had to execute his Constitutional duty. In fact, it was his convenient refusal from justifying the government.

We would like to inform the governor that we were executing our responsibility and the right to express people’s displeasure against this government,” he said. Meanwhile, Sreeramakrishnan said he was enjoying the fuss made by the Opposition. He also said the initial refusal to send his staffer for interrogation by the Customs had a valid reason. “He is an important officer. There were practical difficulties in sending him on the eve of the session’s start,” he told reporters.

Now we are on Telegram too. Follow us for updates
TAGS
Arif Mohammed Khan Ramesh Chennithala