Jumbos force Odisha villagers to live on the edge

Rising elephant menace in the villages on the foothills of Barapahad Hill Range has forced the villagers to spend sleepless nights for months.

BARGARH/JHARSUGUDA: Rising elephant menace in the villages on the foothills of Barapahad Hill Range has forced the villagers to spend sleepless nights for months.

A herd of elephant, which strayed from Hemgir forest in Sundargarh way back in 2007, has made the Hill Range their habitat. Since then, the rampaging elephants have been wreaking havoc among the villagers and destroying their standing paddy crops. In a bid to keep the elephants at bay, most of the villagers are forced to spend night on the trees. They light fire and emit loud noise by drumming tins to chase away the animals.

“This has been going on for a decade as the Forest department is yet to find a permanent solution to our woes,” said Buddhadeb Sahu of Bhutli village. 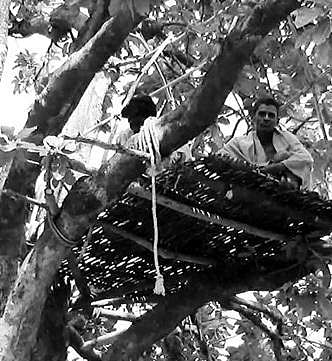 Majority of the people residing in these villages besides those in Debrigarh Wildlife Sanctuary are dependent on the forest for their livelihood.

They cultivate small patch of lands and grow vegetables to eke out a living. Unfortunately, most of the affected villagers are yet to receive any compensation following dispute of jurisdiction between Forest Division and Wildlife Division.

A similar situation has been prevailing in the villages near Mahulmunda, Dengujor, Siriapali, Dapaka and Kolabira Reserve Forest under Kolabira block of Jharsuguda district.  Till now, the elephants have claimed at least six lives and destroyed over 200 acres of paddy crops.

Harried, a villager said, “the elephants have now become immune to any form of loud noise due to which it gets more difficult for us to chase them away.”

Jharsuguda Divisional Forest Officer Arjun Behera said the family members of those killed by elephants have been paid `three lakh compensation besides `10,000 per acre for crop loss as per government norms. Presently, three tuskers have been spotted in the forests under the block and efforts are on to chase them away, he added.