All you need to know about Bhubaneswar's SUM Hospital fire

The fire was first spotted in the dialysis ward located on the second floor of the hospital and it quickly spread to the ICU.

BHUBANESHWAR: A day after a major fire at a hospital here claimed 22 lives, ravaged areas of the medical facility were sealed today ahead of a thorough probe as the state government geared up to ensure proper treatment of patients shifted elsewhere. Health Secretary Arti Ahuja, who visited the private Hospital this morning, said the Intensive Care Unit (ICU), dialysis and emergency units of the fire-hit medical facility have been sealed to ensure a proper investigation. READ MORE

BHUBANESWAR: International flagship carrier Air India (AI) has offered free travel for SUM Hospital fire victims who want to take treatment at hospitals in other metros. According to a statement released by AI, the carrier is ready to fly critical patients accompanied by one attendant to any major city in India to avail the best medical treatment to aid their recovery. READ MORE

BHUBANESHWAR: Odisha Governor S C Jamir and Chief Minister Naveen Patnaik on Tuesday visited AIIMS, Bhubaneswar and AMRI Hospital where fire victims and patients shifted from SUM Hospital are admitted. The CM instructed the hospital authorities to give their best to save lives of the victims. READ MORE

Bhubaneshwar: Three contract-based electricians working for the SUM Hospital-cum-medical college, were suspended on Tuesday. The three employees were on the shift the night of the tragedy and were responsible for handling the power supply. READ MORE

NEW DELHI: Congress President Sonia Gandhi today expressed grief over the loss of lives in the fire mishap at a private hospital in Bhubaneswar. Gandhi extended her condolences to the families of those who were bereaved in the "most unfortunate tragedy" that happened last night leaving 22 dead. READ MORE

BHUBANESWAR: The Odisha Government on Tuesday put the death toll in the Institute of Medical Sciences and SUM Hospital fire mishap at 19. Health Secretary Arti Ahuja who visited the hospital in the morning hours confirmed the toll. Fourteen bodies were brought dead at Capital Hospital where AMRI Hospital received five. There has been no more death reported from any other hospital in connection with the fire mishap. Police Commissioner of Bhubaneswar-Cuttack YB Khurania said, nine of the deceased were women. As many as 106 patients who were injured in the fire are receiving treatment at various hospitals of the City. READ MORE 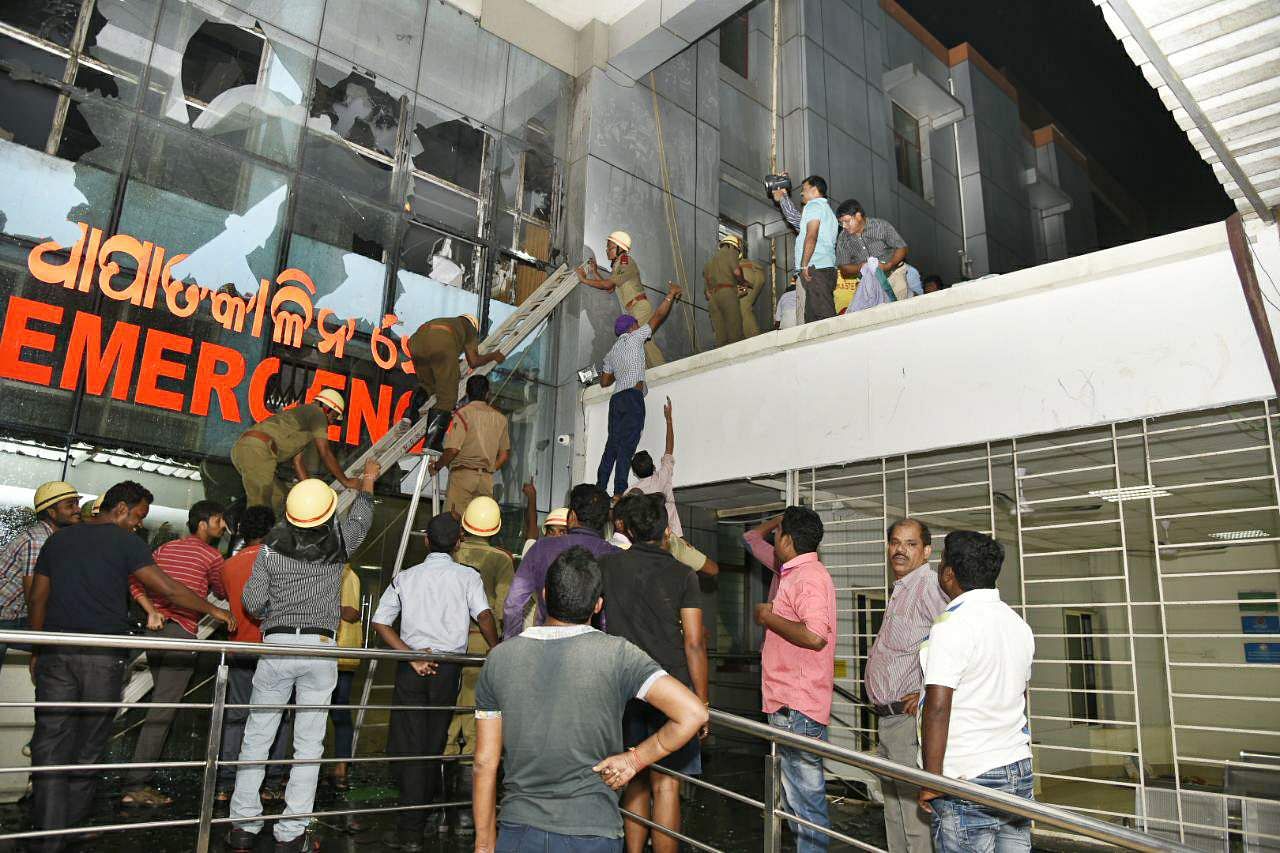 From a flame to the blaze: How the fire spread

What started as a flame at about 7.30 pm engulfed an entire floor, spreading chaos in the ICU and dialysis centre, with the smoke choking patients, attendants and staff. The fire raged on until it was put out by 10.15 pm. READ MORE

NEW DELHI: Following the fire tragedy at SUM Hospital, Prime Minister Narendra Modi directed Union Health Minister JP Nadda, asking him to facilitate the transfer of all injured to the All India Institute of Medical Sciences. The AIIMS, Bhubaneswar, already has admitted about 45 patients from SUM. The prime minister also spoke to Chief Minister Naveen Patnaik.

Spoke to CM @Naveen_Odisha about the distressing hospital fire tragedy. Assured all possible support from the Centre.

The ones who actually were in anguish over the fire tragedy found little space or attention at the hosptials, which soon turned out to be the hotspot for political leaders, media and curious common public. Facing a tragedy of the scale that they have never handled before, the docts at the Capital Hospital had to struggle, what with the routine visits of Netas who expected briefing about the situation. READ MORE Now we are on Telegram too. Follow us for updates
TAGS
Fire Bhubaneswar SUM Hospital