In less than four minutes, P Srinivasa Brahmanand can rattle off all the names of the elements of the periodic table. 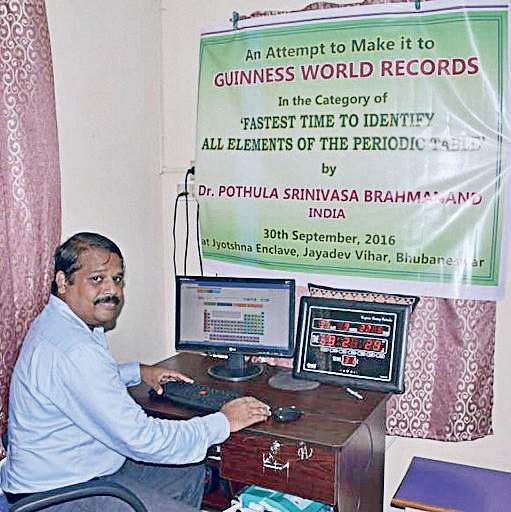 He named and identified all 118 elements of the periodic table, in chronological order and correct spelling, within the stipulated time of the current record of 240 seconds to achieve this feat. Brahmanand actually went on to set a new Guinness World Record by achieving the feat in three minutes and 54.06 seconds (234.06 seconds).

A principal scientist (Agronomy) with the ICAR-Indian Institute of Water Management, Bhubaneswar, Brahmanand was required to memorise and type names of all elements - starting from the first element ‘hydrogen’ to the 118th ‘Ununoctium’ - within the specified period in an online programme devised for this purpose as per directives of Guinness World Records.

“If you type an element name with wrong spelling, the programme will not allow you to move forward,” he pointed out. He had registered himself with Guinness World Records, London and was provided with an application reference number for attempting the record. All the prescribed norms were strictly followed and documents and evidences along with total video recording in digital format was sent to Guinness World Records which were approved on Sunday. Brahmanand had attempted the record on September 30.

But the agro-scientist is not new to Guinness Records. He earlier got his name in the record book for delivering the Longest Marathon Speech on ‘Science and Technology, Society and Human Development’ for 33 hours and 46 minutes at KIIT University, Bhubaneswar during September 8-9, 2012.

He had also delivered a marathon talk on ‘Ideology and spiritual concept of Swami Vivekananda and its relevance to present day society’ for a whopping 38 hours and 21 minutes during February 18-20, 2014.