More than half the cases registered in the last 4 years are still under investigation. Kiran Parashar K M and  Akram Mohammed find out why there is not much progress and what can be done to strengthen

BENGALURU: Every now and then, cases of fake marks cards keep cropping up in the city and also other parts of the state, indicating that the racket seems to be rampant. What is surprising is that of the 63 cases detected in last four years alone, none have seen closure.

According to the Home department, of the 63 fake marks cards rackets busted in four years, 33 are still under investigation. These include four cases registered in 2014, three cases in 2015 and 17 cases in 2016. Court hearings have started in only 14 other cases so far.Shockingly, when Express contacted numerous jurisdictional police officers to check about the developments in the cases, most of them were unaware about the status. Some just said they would get back after checking with the investigating officers.

Police sources say there are many reasons why there is not much headway in the fake marks card cases. “Staff crunch, non-cooperation of universities and educational institutions in the investigations and no leads about existing fake marks card rackets have led to dead ends in many cases,” they say.

Bengaluru city police too have unearthed major fake marks cards rackets, but none of them have seen logical conclusion. City Police commissioner Praveen Sood said, “In general, fake marks card racket is a big nexus which involves some educational institutions also. Many times, after filing a complaint, the complainant gets isolated. But after filing FIR, the process of documentation begins for the police. We cannot file chargesheet without sufficient documents. For this, the complainants have to co-operate. This happens in most of the white collar crimes.”

“In future, if we are not able to get more evidence (co-operation from complainants), we may have to wind up such cases,” he added.In 2014, police booked a case against an ‘advocate’, Shivaraj Balappa Sanadi from Belgaum, who had enrolled with the Karnataka State Bar Council by producing a fake marks card from a college that did not even exist. Vidhana Soudha police had booked a case under several sections of IPC. But the case is still under investigation. 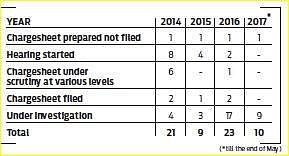 In September 2016, Shivamogga district police unearthed a major marks cards scam where they found out that SSLC, PUC and other marks cards were sold for `15,000 each. Eight people were arrested in the case and representatives of nine educational institutions which were imparting distance education courses were also summoned. The Home department says they are still collecting documents related to the case.
Shivamogga district SP Abhinav Khare said, “We have transferred the cases to other districts after we found the crimes took place there. We have taken up the case seriously and investigations are under way as many people are involved in the racket.”

In Bengaluru city, many of fake marks cards cases are with the Central Crime Branch. But the staff crunch has badly affected progress in the investigations. Recently, the city police arrested five people who were part of a fake marks card network spread across the country. However, there has not been much headway in the case. Crime Branch officials say they are busy attending trials in 800 cases. Investigations in 152 cases have been impeded due to staff crunch, they pointed out.