Shrugging off the hyperandrogenism controversy which is back again to haunt her, Dutee Chand ran the heat like only she could on Thursday.

BHUBANESWAR: Shrugging off the hyperandrogenism controversy which is back again to haunt her, Dutee Chand ran the heat like only she could on Thursday. The champion sprinter ended up with the fastest timing among all the 24 contestants and remained in sight of a medal in the 100m race at the Asian Athletics Championships here. 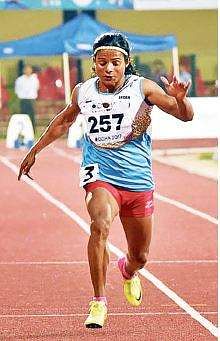 In the third heat of the event, Dutee ended with 11.40 sec and qualified for the semi finals. She was well ahead of her Kazakhstan contestant Olga Safronova who clocked 11.55 sec. Another Kazak sprinter Viktoriya Zyabkina finished with 11.50 sec in the first heat.
The semi finals will be held on Friday. Dutee was ecstatic after the heat and showed no sign of being perturbed by the fresh controversy over the IAAF decision to return to Court of Arbitration for Sports on the hyperandrogenism issue.

In the 2013 edition of the Asian Championships at Pune, Dutee had managed a bronze in the 200m category while Zybkina had grabbed the gold.
In the men’s 100 m category, Amiya Kumar Mallick clocked 10.48 sec and ended up at the third place in the heat.